The Emotions of PMS

Pre-menstrual syndrome, otherwise known as PMS, is a combination of symptoms that women experience prior to menstruation. There are nearly 150 symptoms associated with PMS and can include mood swings, headaches, bloating, breast tenderness, mild depression, cramps, and skin outbreaks. Most symptoms are mild and manageable. PMS affects approximately 85% of menstruating women.    However, about 8% of women with PMS have symptoms that completely disrupt their normal life activities.  The cause of PMS is not completely understood and proven; however, we do know that is it most likely due to fluctuating hormones.  We know this because young girls (prior to menarche) and postmenopausal women do not experience the cyclic symptoms associated with PMS.  This complexity is part of the reason why PMS is not thoroughly understood. It is, however, recognized that hormones do fluctuate around that time, which is why we often blame hormones and describe women as being “hormonal.”

There are some conditions that have physical symptoms that often get confused with PMS, as they are worse prior to menstruation. Conditions such as polycystic ovarian syndrome (PCOS), endometriosis, and estrogen dominance are worse during the premenstrual period but should not be considered part of the normal physiology of a woman. For the sake of simplicity of this article, I will refer to women with PMS who do NOT have these diagnoses and who are not on hormone contraceptives.

Even though PMS has been considered a diagnosable condition, I would propose that if 85% of women experience symptoms associated with PMS, then it isn’t a condition but rather a normal and necessary part of the physiology of a woman. When women are described as being “hormonal” it isn’t necessarily due to imbalanced hormones, but rather normal fluctuations in hormone levels.  We often focus so much on the negative of a symptom and how to fix it that we forget to look at what benefit might be associated with that symptom.  Other common examples of this are fevers and diarrhea.  We frequently worry about the negative ramifications of these events, and we forget that these are both necessary ways that the body brings itself back to homeostasis and health.  Once the benefit is known and understood, the condition itself can be better tolerated or managed, as there is less rumination on the negative symptoms.

After 10 years of working with women (and being a woman myself) I have concluded that PMS symptoms are a normal part of physiology and actually a good sign of fertility; research is also pointing toward this reality.  PMS is normal and healthy, yes.  But the experience of PMS is the real issue and the part that can disrupt a woman’s life.  Hormonally, the physiology of women with very mild symptoms compared to one with extreme is nearly identical.  The physiology is the same but the complexity arises due to the interrelationship of all the factors that contribute to the experience – physiological, emotional, environmental and cultural – all of which are nearly impossible to measure via standard research protocols. PMS may very well be a healthy neurological state and the disruption in life due to ‘PMS’ could very well be cultural or perceptual issues that create the feelings of anxiety, irritability, and hopelessness several days before menstruation.

To understand this let’s look at the complex biological changes that are occurring during a woman’s cycle.

Research shows that estrogen increases serotonin levels.  The estrogen drop, mid-cycle, decreases serotonin temporarily, which raises testosterone and causes a surge in luteinizing hormone (LH).  The result is ovulation.  The lower serotonin levels play a role in increasing libido and decreasing blood constriction to the uterus to aid in fertilization and implantation.  It is thought that the lower serotonin triggers the brain to seek out an endorphin rush, which is often met by physical intimacy.  I imagine this is how our species has survived.

If procreation is not a goal of the woman, as a clinician I focus on educating women on the importance of other serotonin-increasing 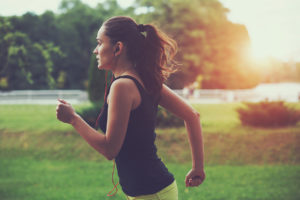 activities mid-cycle such as: massage, aerobic exercise, socialization, laughter, etc.  Research has shown that women who engage in activities that naturally increase central nervous system serotonin experience much less emotional irritability.  Without these activities, women may rely on other compensation measures such as food. If women’s food choices are poor, this can cause other hormonal imbalances, progressive weight gain, fluid retention, and self-esteem issues, which can only worsen over time, especially during the premenstrual time. This cycle can  have a snowball effect as months pass.

If the female cycle is working properly, progesterone rises in the luteal phase (post ovulation), higher than estrogen, women will feel a sense of calm and relaxation and will be less energetic compared to the beginning of their cycle.  Their libido will also drop in intensity.  The biological reason for this is to help aid in reproduction.  From my experience, cultural beliefs and expectations demand that women be “on their game” and ultra-productive all the time.  One would think that feelings of calmness and relaxation are good, but modern women do not have time for “calm” and “relaxation.” The culture of American women to be “perfectionists” in all they do can cause them to over-ruminate on why they aren’t feeling as well and as motivated. This perception can create a “moodiness” viewed by those around her as she gets frustrated that she cannot handle or accomplish all that she normally would.  If women were taught that it is normal to experience fluctuations in their mood and hormones, perhaps the rates of PMS affecting women’s lives to a level of detriment would decline.  However, we live in a society that tries to control everything and not accept the natural fluctuations of nature.  We live during a time when women wear more hats than they can handle and are not taught how to say “no.” They think that they should do it all and don’t need help.  I am in support of women working and breaking the glass ceiling, but we also have to recognize and respect our physiology as women. Women’s and men’s brains are wired differently, and women feel more deeply and express emotions more frequently.  Women may notice the feelings of others more, and this sense of empathy brings a much more powerful sense of intuition and instincts.  This emotional state is not a weakness, but rather a strength and source of power to keep themselves and the children safe.  The woman’s normal physiology of hormone fluctuations is a biological necessity and the most powerful strength of all humankind because without it none of us would exist.

Education about what is happening during PMS is one of the biggest missing pieces.  If a woman can understand and accept these changes as normal and healthy, then solutions can be found and she can adjust her lifestyle a bit during that time to help compensate.

Some suggestions to improve mood during hormonal fluctuations are:

Most often PMS is treated like a disease and women are given serotonin drugs to raise this supposedly feel good hormone. However, serotonin is much more than a “feel good hormone.” In men, research shows that higher serotonin will lower testosterone and cause depression.  The medications can help minimize feelings, which can help in situations where one isn’t in control of emotions.  However, they do not help produce real happiness and joy.