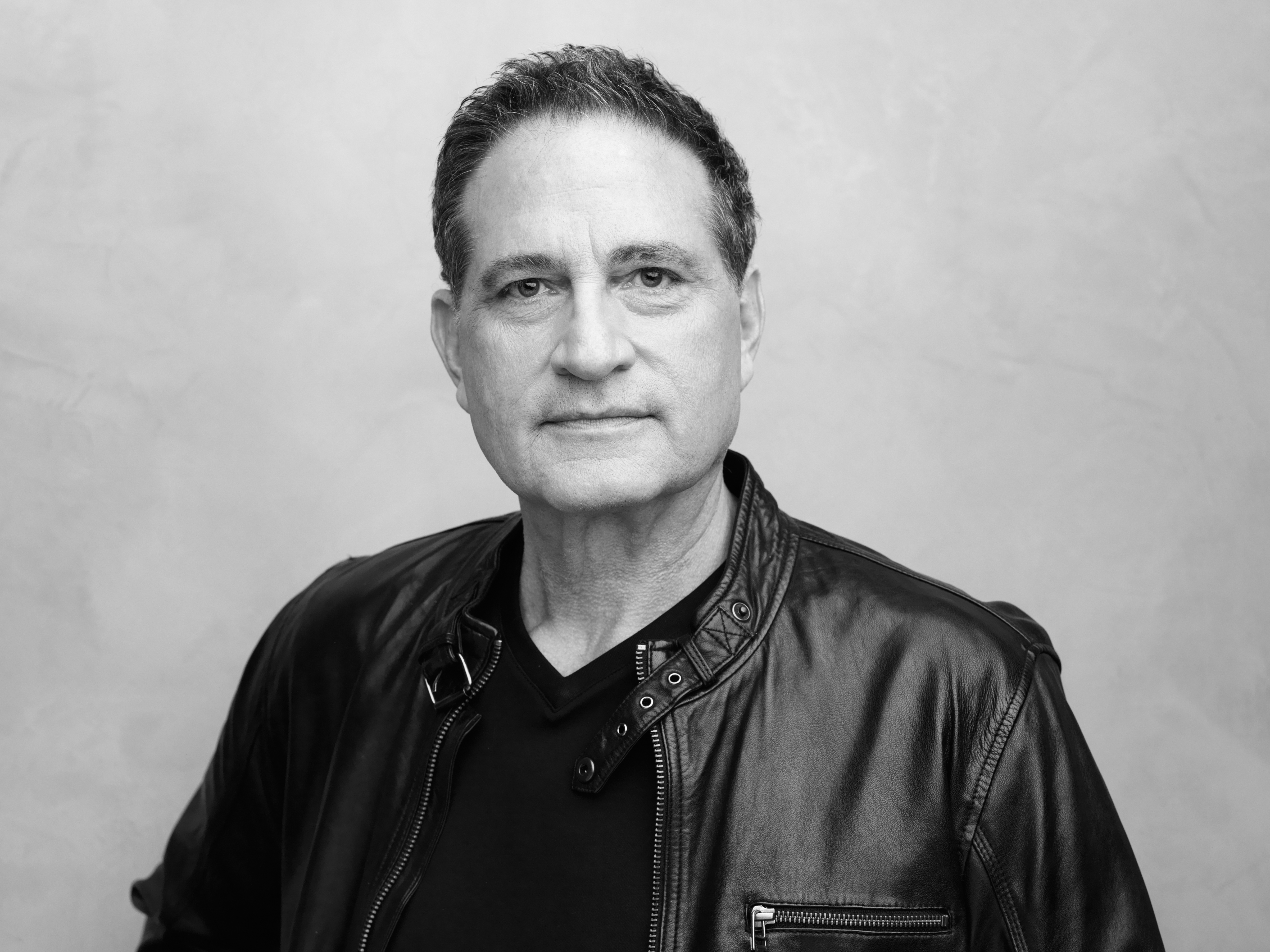 Neil Riordan, PhD is an accomplished scientist and one of the pioneers and leading experts in the use of non-controversial stem cells. He began his research career at the Riordan Clinic leading the research team studying the pro-oxidant effects of high dose intravenous vitamin C on cancer. He went on to develop and refine mesenchymal stem cell technologies that he utilizes at the Stem Cell Institute in Panama, where these technologies continue to be implemented in patients with autoimmune and degenerative diseases and injuries. He is also the co-founder and Chief Science Officer of the Riordan-McKenna Institute in Dallas, Texas. In the stem cell arena, he and his colleagues have published more than 20 articles on multiple sclerosis, spinal cord injury, heart failure, rheumatoid arthritis, Duchenne muscular dystrophy, autism, and Charcot-Marie-Tooth Syndrome. His new book, Stem Cell Therapy: A Rising Tide: How Stem Cells Are Disrupting Medicine and Transforming Lives, has recently been published.

Anne: Can you tell us a little bit about your early research career at the Riordan Clinic? You talk about this in your book, the research you did studying the effects of high-dose vitamin C on cancer.

NR: I think the biggest discovery we made was that we could get vitamin C levels in the blood of cancer patients high enough that the vitamin C was able to kill cancer cells. We were able to do that because we had many tumor cells growing in cultures in the laboratory. The break-through study that led to our patents was we actually drew blood from cancer patients, who were receiving intravenous vitamin C in one arm, drew blood from the other arm and took the liquid part of the blood (the serum) out and put it on the tumor cells. The blood containing the high dose of vitamin C could actually kill tumor cells. That’s why the patent office gave us such broad claims. To date, out of all the patents I have, it’s the broadest claims we ever got out of the patent office, because no one had ever shown that before. There were studies of high dose vitamin C in cancer patients showing benefits that nobody had shown, that you could get blood levels of vitamin C to kill tumor cells. The cell culture part of that, learning at the Riordan Clinic how to grow cells, was hugely important to my career.

The next generation of treatment was trying to stimulate the body’s own immune system to recognize and destroy cancer cells. One of the main players, which is now a drug called Provenge, is used for treating prostate cancer using dendritic cells. To get the immune response in the body, to get rid of these cancer cells, the dentritic cell is a huge player in that it stimulates the T cells. If it has the right information, it can pass it along to the T cells, which can then divide and create an army of cells that are active against the tumor cells themselves.

“Monocytes can become shape-shifters in the presence of cancer. A monocyte that is in the tissue is called a macrophage, which means “super eater.” When the macrophage adheres to a cancer cell, it takes a bite out of it. Inside the macrophage are little enzyme packets that act like stomach acid to break down the tumor cell into smaller and smaller bits. After consuming the tumor cell, the macrophage knows it needs to alert the rest of the body to the presence of this dangerous intruder. In many instances, the macrophage next transforms itself into a dendritic cell, which is a highly effective messenger to the body warning it that it must immediately begin a powerful immune system response to battle the tumor.” (Riordan, 2017, p. 22-23)

Our next leg of research was cases of patients who got vitamin C in lower levels, that weren’t toxic to tumor cells and yet the tumor cells 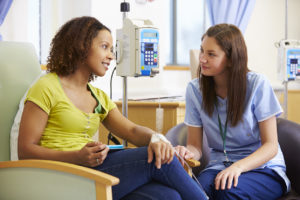 went into complete remission. We found that interesting, and the more obvious conclusion is that the vitamin C is having a biologic response modification benefit; it’s not directly killing the tumor cells, although there could be some of that. But when we looked at the data, looked backwards, some of these patients received only 15 grams which we know is not enough, and 25 grams is not enough to be cytotoxic to tumors, so we believe that the immune system was ultimately identifying and destroying the cancer. We started looking at dendritic cells as a way to stimulate this transfer of knowledge to the immune system about the tumors, and that’s where I got into stem cells, because the dendritic cells are the progeny of one white blood cell in the body called the monocyte or the macrophage. When the macrophages are out of the body, you can convert them into dendritic cells. What we did was harvest large amounts of white blood cells from the patient, take the monocytes and convert them to dendritic cells, give those cells information about the tumor, and then that was a therapeutic vaccine for the patient.

Anne: How did this transition into your work with stem cells?

The reason I got into stem cells was, after leaving the Riordan Clinic, when I was in the Bahamas, we wanted bigger and better dendritic cell vaccines, and in order to do that we’d give the patients a drug called GCSF (granulocyte-colony stimulating factor), which would stimulate the bone marrow to produce more of these stem cells to be harvested from the peripheral blood. We would convert those stem cells to monocytes, the monocytes into dendritic cells. So the basis for my whole first stem cell company was taking this certain type of stem cell and growing it in the laboratory to make a bigger, better vaccine.

That was the early stuff with stem cells, but there are actually two major kind of stem cells in the body. There are HSCs (hematopoietic stem cells), which are bone marrow stem cells that basically make all of the blood products (white blood cells, red blood cells and platelets). Then there are MSCs (mesynchymal stem cells) and they are found in bone marrow, but they are also found in every tissue in your body. They actually reside next to every stem cell of whatever organ you are in. In the liver there are stem cells and right next to those are the MSC, which supports and nurtures the liver stem cell. It is the same thing in the heart, kidney, intestine, etc. Every tissue in your body has stem cells that are specific to the tissue and every one of those is supported by an MSC.

“Mesenchymal stem cells (MSCs) used for treatment may come from the patient (autologous, or self-derived) or from a donor (allogeneic.) MSCs can be obtained from many tissues in the body, including fat, bone marrow, and umbilical cord. Bone marrow contains cells that are useful for regeneration, including MSC and CD34+ cells. Bone marrow MSCs are usually extracted from the hip or the knee. In many cases, it is useful to concentrate the extracted cells that will be the most helpful – this is known as bone marrow aspirate concentrate (BMAC). Bone marrow MSCs have been used to safely treat various conditions with positive results.

The perception is that all stem cells come from the unborn and that in order to harvest the life-saving properties of these cells, a scientist must sacrifice a yet-to-be-born child. The whole idea of taking life from one being to give it to another makes many people uncomfortable and raises moral and ethical questions. It makes me very uncomfortable too, for additional reasons. First, I believe the best stem cells – the ones with the best healing and regenerative power as well as the fewest complications – are adults stem cells, which can be obtained from donated umbilical cord blood; umbilical cord tissue from healthy, live births; or from a patient’s own body – from the bone marrow or fat tissue, for example. Adult stem cells are not mired in controversy. In fact, the Baptist church endorses research with adult stem cells and the Catholic church has been funding adult stem cell research.” (Riordan, 2017, p.32-33)

So the work that we do now, since 2001, is utilizing MSCs to stimulate healing. We do it in three major categories through the secretions of the cells. It’s not the cells becoming another cell. We thought in the early days that they could become many kinds of tissues, and in the lab we and others have gotten very good at converting them to liver cells, heart cells, and they kind of default toward connective tissue. It’s simple to convert them in the lab but when you inject them in the body they do not differentiate. The benefit of these cells has nothing to do with them becoming something; it has to do with what they secrete while they are alive in the body. The three major categories are: they secrete things to decrease inflammation, modulate the immune system, and they stimulate regeneration. They also have anti-scarring effects, anti-cell-death effects, but those three mechanisms are where they have so much value.

Anne: How can one cell treat so many different things? 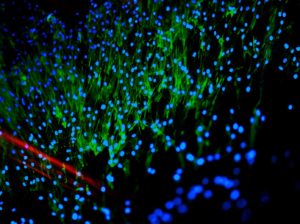 The Riordan Clinic identifies things that can be detrimental to your MSCs, and the nutrients they need. The clinic really does stem cell work, removing what harms the stem cells and replenishing it with things that are beneficial.

Dr. Neil Riordan will be giving a lecture about stem cell therapy at the Riordan Clinic on Friday, October 6 at 6:30PM. This lecture is open to the public and he will be signing copies of his new book. For more information and to register for this lecture, please visit: https://riordanclinic.org//events/.