RESEARCH SPOTLIGHT: The Influence of Sulforaphane on Cancer Suppression and Blood Sugar Control

Suforaphane is a phytonutrient that is found in cruciferous vegetables. New research has shown the important role that this nutrient plays in cancer prevention and regulation of blood sugar. 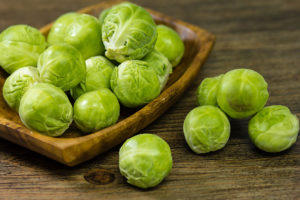 Research has shown that cruciferous vegetables high in sulforaphane can help modulate enzymes in phase I and phase II biological pathways, which can help reduce the effects of environmental carcinogens. Once inside the cell, sulforaphane can turn on the cell’s
natural defense mechanism by signaling individual cellular enzymes as well as increasing the production of antioxidants. This helps restore the gene’s activity toward normal cell progression.

According to a recent study published in the Journal of Nutritional Biochemistry, sulforaphane has an influence on a non-coding RNA that is upregulated in prostate cancer. Non-coding RNAs play an essential role in controlling which genes are expressed as well as in cellular development. Researchers believe when non-coding RNAs get dysregulated they can contribute to chronic disease and cancer.

As prostate cancer is the second leading cause of cancer-related deaths in men in the U.S., the effects of sulforaphane on normalizing the long, non-coding RNA levels could be a very important resource in cancer prevention, as well as slowing the progression of cancer.

According to another study published in Science Translational Medicine, sulforaphane reduced fasting blood sugar as well as HbA1c in
obese patients with dysregulated type 2 diabetes.

Sulforaphane suppressed glucose production in the liver by decreasing expression of key enzymes and activating Nrf2 pathways. In addition, sulforaphane also reversed the effects of diabetes in the liver by a magnitude of that similar to metformin. This is significant as
Type 2 diabetes affects more than 300 million people worldwide, and up to 15% of those patients cannot take metformin because of the risks of kidney damage. Another advantage of sulforaphane is the antioxidant properties it has, which can protect against diabetic neuropathy, renal failure, and atherosclerosis in diabetic patients.

New research is showing that food is indeed the best medicine.

Incorporating sulforaphane-containing foods in the diet can help prevent the progression of a multitude of chronic diseases. Foods that contain the highest amount of this phytonutrient are: