Initially, I set out to write a completely different article in connection with my upcoming lecture in May, “Mysteries of the Gallbladder.” However, I felt compelled to share this news on intravenous (IV) vitamin C with you as it has the potential to save your life or the life of your loved one.

On March 23, 2017, National Public Radio (NPR) reported on a story about an Intensive Care 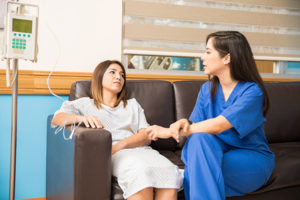 Unit (ICU) doctor who was bringing IV vitamin C research to the bedside in real time1. Dr. Paul Marik, MBBCh, of Eastern Virginia Medical School, went out on a limb and gave a combination of IV vitamin C, a steroid called hydrocortisone, and vitamin B1 (thiamine) in an IV solution to hospital patients dying of life-threatening response to infections called sepsis …and…they lived! They not only lived, but the death rate in Dr. Marik’s hospital from sepsis fell from 40% to 8.5%2. His work builds on the work of Dr. Alpha Fowler and others showing survival benefits of giving IV vitamin C for sepsis infections3.

Sepsis used to be known to the public as “blood poisoning.” According to Dr. Marik’s research paper, “the global burden of sepsis is estimated as 15 to 19 million cases annually with a mortality rate approaching 60% in low income countries2.” According to the Centers for Disease Control (CDC), sepsis is considered a medical emergency and time can make the difference between life and death4. Sepsis is the body’s overwhelming response to a life-threatening infection that can lead to tissue damage, organ failure, and death5. The CDC also found that, “7 in 10 patients with sepsis had recently used healthcare services or had chronic diseases requiring frequent medical care6.”

Dr. Marik’s story is not the first story regarding IV vitamin C and survival from sepsis. In 2009, New Zealand dairy farmer Allan Smith contracted swine flu, developed pneumonia, and was quickly placed on multiple machines in the ICU keeping him alive while his body fought through sepsis. His condition worsened and the doctors came to his family to withdraw life support because he had been in a coma for 3 weeks.  His family said that before taking him off of life support that IV vitamin C should be tried. The family was persistent, and Allan was given IV vitamin C.  On a Tuesday night he was given 25 grams of IV vitamin C and on Wednesday morning he was given 25 grams again. After two days on IV vitamin C his lungs began to clear. When Allan was continued on IV vitamin C, he was able to get off of life support. He is still alive and well today. To watch the full video told by his family on New Zealand news you can go to the link below7:

Another doctor who pioneered the use of IV vitamin C to fight infections was Fred Klenner, MD.  Dr. Klenner used IV vitamin C in Reidsville, North Carolina, to successfully treat polio, diphtheria, herpes zoster (shingles), herpes simplex, chickenpox, influenza, measles, mumps, and viral pneumonia in the 1930’s and 1940’s. This was before the mass use of antibiotics, as Alexander Fleming discovered penicillin in 19288. You can read more about the work of Dr. Klenner in the book Injectable Vitamin C: Effective Treatment for Viral and Other Diseases.

As patients, we need to keep asking the hard questions.  I ended up in Integrative Medicine because I was asking questions and seeking the truth. Some of the following questions, I believe, need to be seriously considered.  If IV Vitamin C is improving survival rates in sepsis, could the patients getting sepsis (the elderly, the people with chronic conditions like diabetes, the patients with weakened immune systems on chemotherapy with cancer) have a deficiency in vitamin C? Could people with chronic illness be walking around in their daily life with a low grade scurvy? Furthermore, could they have other deficiencies we don’t even know about such as vitamin D? Could they be deficient in minerals, amino acids, healthy fats, B vitamins, etc.? Based on my years in practice I believe these are valid questions to pose, and ones that can mean the difference between life and death for, not just sepsis, but all chronic conditions. As an example, Vitamin D deficiency has been documented in studies as an independent risk factor for mortality (risk of death) of ICU patients9.

Here at the Riordan Clinic, we have been checking nutrients and giving IV vitamin C for over 40 years. Over 40 years. I can tell you from my years in practice with checking hundreds of nutrient profiles in patients that I have yet to see a completely normal profile on anyone – even those coming to us for wellness checks with no current medical issues. The deficiency states and toxicity states of our citizens in this country continue to astound me. Even when people think they are getting the nutrients they need from their food, when we check their nutrient levels they are still lacking.

In fact, the Nutrition Security Institute has data showing the decline in mineral and vitamin content of our food supply over the past 80 years. To give you some examples, the decrease in the mineral content of one medium apple from 1914 to 1992 is quite remarkable. Per apple the amount of magnesium has dropped 82%, phosphorous 84% and iron 96%10! Our bodies need these minerals for vital functions like carrying oxygen, giving us energy from metabolism, and getting rid of our waste products.

Knowledge is powerful. I present you with this information in hopes that you will continue to seek the truth and question the conventional standards so that, together, we can rise above! To watch the videos, read the full papers and protocol please visit the Riordan Clinic Research page/facebook page. I hope to see you at the end of May for our lecture unfolding many health mysteries and how they are connected to the gallbladder.