There are so many health trends these days that sometimes it’s hard to determine what will make the most impact. I’m here to tell you that eating organic foods will give you one of the best returns for the investment in your health.

New research suggests that glyphosate, which is one of the active ingredients in the Monsanto’s herbicide Roundup, could be connected with the rising rates of chronic diseases in the United States. More than 1 billion pounds are sprayed in the U.S. alone every year. This herbicide is regularly used on crops that have been genetically modified to be resistant to this chemical. These crops are known as “Roundup ready.” Some of the biggest sources of these genetically modified foods are in processed food including: wheat, soy, corn, and sugar. I don’t think it’s a coincidence that we are seeing skyrocketing rates of allergies and sensitivities to these foods. Not to mention that glyphosate is particularly damaging to the good bacteria that reside in the gut. This contributes to dysbiosis, or overgrowth of the harmful bacteria, and leaky gut.

Some of the conditions1 that have been connected with the increased use of glyphosate use are: 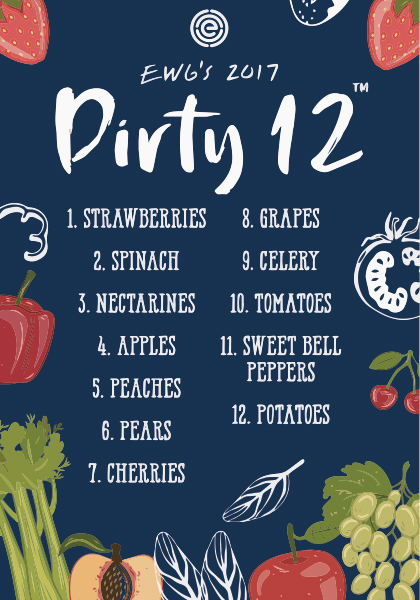 I understand how expensive it can be to eat all organic foods. However, consider some food for thought: what you invest in your health now will decrease what you have to invest in the future. Eating organic now is much less expensive than paying for the chronic diseases listed above. In addition, research shows that organic foods have more nutrients in them2. Therefore, nutritionally you are getting more for your money by eating organic.

If your budget doesn’t allow you to eat all organic, follow the guide3 put out by the Environmental Working Group called The Dirty Dozen. This list includes the twelve foods with the highest residue of pesticides. If you eat only these twelve foods organic, you will cut out a significant amount of pesticides that you are exposed to on a regular basis.