Dr. Atsuo Yanagisawa shadowed me at the Riordan Clinic in 2005, the year of Dr. Hugh Riordan’s sudden passing. As both an M.D. cardiologist and PhD researcher, Dr. Yanagisawa was intrigued with the use of high dose ascorbic acid being given intravenously for cancer. His experience at the Riordan Clinic led him to found and grow the Japanese College of Intravenous Therapy, whose now 600+ Japanese doctors follow the Riordan IVC Protocol for Adjunctive Cancer Care. His exciting story below, published in the Japanese version of Newsweek, highlights the ever-growing use of IVC as a “minimally invasive” cancer treatment tool that improves outcomes, minimizes side effects, reduces treatment toxicity and results in improved quality of life (QOL) for IVC treated cancer patients, as documented in four published QOL studies. Dr. Ron Hunninghake, Chief Medical Officer

Japanese College of Intravenous Therapy High-Dose IV Vitamin C Following announcements that clinical data show that cancer is controlled and QOL is restored, the High-Dose IV vitamin C therapy rapidly became popular in the USA from ten years ago. In Japan too, this treatment was spotlighted from early on. Here, we talk to Dr. Atsuo Yanagisawa of the Japanese College of Intravenous Therapy.

The biggest demand of medical treatment today is to be “minimally invasive” – in other words, a mindset that adapts to the needs of medical consumers, where achieving the best treatment results while minimizing the damage to the patient is the ideal. In particular, the advancements in minimally invasive treatment for cancer are noteworthy. Surgical operations using endoscopes or laparoscopes differ from conventional operations that involve large incisions. The former dramatically reduces post-op recovery time. Moreover, with the latest radiotherapy, such as proton beam or laser knife, only the lesion is targeted, making it possible to minimize the damage to surrounding normal tissue. Even in chemotherapy, where side effects are a given, it is no exaggeration to say that the appearance of molecular target drugs that only attack specific cancer cells has changed the entire treatment landscape.

Amidst all of this, minimally invasive cancer treatment has become a hot topic in the USA, and the treatment that is spreading across the continent is known as “high-dose IV vitamin C therapy.” A transfusion containing a mega dose of vitamin C (ascorbic acid) is injected via an intravenous infusion into a vein, where it works to shut down cancer cells. It is used in tandem with early stage cancer treatments, pre-op treatments and post-op follow-ups, chemotherapy and radiotherapy. When in advance-stage cases where there seems to be no treatment available, this vitamin C therapy is stepping into the breach as a treatment for various circumstances – hence the excitement about it. No cutting of the skin in an operation or side effects from anticancer drugs, word is that you just relax on a bed or in a reclining chair for about an hour while an intravenous infusion feeds you a minimally invasive treatment that can treat cancer. Yet, why is it that an IV vitamin C alone can offer such efficacy? “The vitamin C used in this treatment is highly concentrated and is given in 50-to-100- gram doses, which is the equivalent of 2,500-to-5,000 lemons being directly introduced to a vein – not orally – but via an IV infusion, raising the vitamin C concentration in blood by a huge amount,” says Dr. Atsuo Yanagisawa, former professor of Kyorin University, and current chair of the Japanese College of Intravenous Therapy.

“And, when there is a high concentration of vitamin C in the blood, the constituents seep out of blood vessels, creating hydrogen peroxide (reactive oxygen), which, once taken in by cancer cells, greatly arrests the activity of the cancer, and is thought to lead to cell death.”

Numerous cases in the USA use vitamin C in early stage pre-op treatment.

Let us look specifically at the treatment.

As it has been said, this therapy covers everything from early stage to progressive and metastatic cancer, which means it can be introduced at any stage of the illness.

However, according to Dr. Yanagisawa, the ideal approach is to start using it as soon as the cancer is discovered. “At the pre-op treatment stage, more and more cases are using a combination of chemotherapy and high-dose IV vitamin C therapy. Using this therapy to assist other treatments reaps great results and, furthermore, the body does not build up resistance to it (efficacy of medication does not drop) even when it is used for prolonged periods. From that point alone, it is an extremely effective therapy when used as quickly as possible at the pre-op treatment stage.”

In ongoing basic experiments in America, high-dose IV vitamin C therapy is being taken prior to operating, and there are reports that doing so lowers the risk of metastasis after that. Indeed, when used together with radiotherapy, vitamin C may effectively restore normal tissue exposed to radiation. In cancer therapy, making an accurate early stage prognosis greatly impacts the progress of recuperation, which, in itself, is enough to tell us that we need to at least know about the existence of high-dose IV vitamin C therapy.

As the chart (at the end of the article) shows, clinical tests are in progress on high-dose IV vitamin C therapy in countries around the world, including Japan.

“Apart from some extremely rare types of cancer, we know that high-dose IV vitamin C therapy is very effective against just about all forms of cancer” says Dr. Yanagisawa. Nevertheless, he also points out that precision techniques are required to administer the vitamin C.

“In illnesses where progression is fast, like pancreatic cancer, an IV infusion needs to be given on consecutive days, whereas, with slow progression cancers, like prostate cancer, the basic rule is to just administer the vitamin C about once a week. So, frequency and amount of therapy needs to be adjusted while giving consideration to degree of progression and the stage reached.”

High-Dose IV Vitamin C Therapy shows efficacy in QOL One more benefit from high-dose IV vitamin C therapy is the efficacy it shows in restoring quality of life (QOL). For instance, even though the progression of the illness is being held back, if the pain caused by cancer (carcinomatous pain) is severe, it alone will act as a massive obstacle to daily activities. High-dose IV vitamin C therapy has shown that it also is effective in relieving pain.

“A considerable number of patients say that pain has been greatly reduced just by comparing their pain levels pre and post IV infusion. One person having trouble breathing due to lung cancer found that their coughing subsided after IV infusion, which surprised both the patient and their family. This is because high-dose vitamin C is considered to have an acute antioxidative effect.” Dr. Yanagisawa says that he and his research group are clinically testing how the high-dose IV vitamin C therapy improves QOL and that they have confirmed its superb effectiveness. “In cases where the aim is to treat the cancer and improve QOL, we have confirmed efficacies from using IV infusions two or three times a week, continuing for at least an initial period of three months. Many patients experience improvements in their QOL, such as recovery of appetite, disappearance of washed-out feeling and subsidence of pain compared to before the treatment started. These efficacies come from an approach that combines dietary care, nutritional care and mental care, so that the obstacles to daily living can be reduced even for patients with progressive or metastatic cancer.”

Yet, although high-dose IV vitamin C therapy is excellent in terms of effectiveness and safety, there are points where care should be taken.

“For instance, using high-dose IV vitamin C therapy together with other treatments, such as velcade used in treating multiple myeloma and methotrexate used for chronic leukemia, leads to a risk of serious side effects, so such combinations must be avoided. Also, for pharmaceutical preparations, at the Japanese College of Intravenous Therapy, we get our 650 nationwide member clinics to avoid domestically produced pharmaceutical preparations that contain preservatives and instead have them use preservative-free ones imported from abroad.”

As a highly talked about minimally invasive treatment for cancer, high-dose IV vitamin C therapy is being introduced as a clinical treatment in more and more medical institutes in Japan. As an increasing number of cancer patients seek alternative “minimally invasive” treatments, we expect high-dose IV vitamin C therapy to be one of the most popular options. 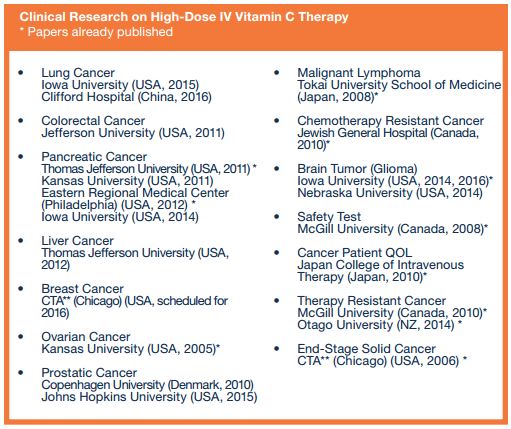