The 10 Most Toxic Minerals

Many minerals are an essential part of a healthy diet.  Some minerals are toxic, even in micro-amounts.  They are formed by combinations of various elements.  In this article you will learn, or be reminded, of the differences between minerals and elements, where the word mineral comes from, various toxic minerals and the dangers associated with each.  We will also take a virtual “Grand Tour” of where the 10 most toxic minerals are likely to be encountered, what action to take if encountered, diagnostic symptoms, tests, and potential medications available for treatment. 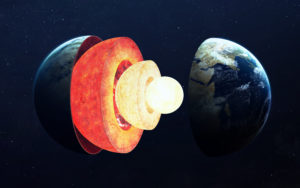 In the late 14c the word ‘mineral’ (from Medieval Latin minerale) referred to ‘something mined.’ Today minerals are defined as inorganic substances found in crystalline forms such as salt, diamonds and even rocks.  Elements are pure inorganic substances which comprise the Periodic Table of Elements (shown below).  There are currently 118 known elements; elements 95 to 118 are not currently found in nature but have been synthesized in laboratories.  All substances organic and inorganic are formed by combinations of various elements. Notice that the toxic elements are highlighted in the Periodic Table. It is these elements that are the “toxic” part of toxic minerals.  Also, the circled 12 elements are radioactive forms of elements used routinely for medical, military, or commercial purposes: All radionuclides may be dangerous, or “toxic”.  In accepted usage, a heavy metal is a toxic metal.  Some lighter metals are toxic, thus have been termed heavy metals, while some heavy metals, such as gold, and typically are not toxic.  Thus, there is ambivalence in the term “heavy metal.”

Rock hounds and crystal collectors BEWARE! Following is a list of the “10 Most Deadly Rocks and Minerals” as compiled by Listverse.com.

10. Coloradoite is a recently discovered crystalline mineral originating in magma veins. This mineral is a mercury telluride compound formed when mercury fuses with tellurium, an extremely toxic and rare metal.  This looks like the mineral was discovered in Telluride, Colorado, but I have found no reference to this. Interestingly, Coloradoite may be mined for its tellurium content because tellurium readily combines with gold, accounting for a bizarre gold rush in Kalgoorie, Australia.  Pot holes in the streets of Kalgoorie had been filled with gold-bearing tellurides.  Years later, when this was discovered, the gold rush was centered on digging up the ore that had been used to fill the pot holes. When heated or carelessly handled the double-barreled combination of mercury and tellurium poses a deadly threat.

Crystals, like Coloradoite, are formed from elements mixed in the three innermost super-heated layers of the Earth, beneath the outer layer, known as the Earth’s Crust. The layer beneath the Crust is called the Mantle and is the location of magma. When the magma is forced to the surface, it is known as lava.
9. Chalcanthite. Seductive blue chalcanthite crystals are composed of copper, combined with sulfur, other elements and water.   Copper, required in small amounts by the body, becomes highly bio-available in a water soluble form and may be rapidly assimilated, resulting in high copper levels which shut down body processes.  Calcanthite should never be tasted for salt content, or an extremely serious overdose of copper may result.  Calcanthite may be encountered in copper mining regions world-wide.

8. Hutchinsonite is a hazardous but dramatic mixture of thallium, lead and arsenic, forming a lethal mineral cocktail. Signs of chronic thallium exposure through skin contact include loss of hair, serious illness and, in many cases, death.  Hutchinsonite was named after John Hutchinson, a prominent mineralogist from Cambridge University. The mineral is found in mountainous regions of Europe.

7.Galena (not Kansas or Illinois) is the principle ore of lead, and forms glistening silver cubes with almost unnaturally perfect shapes. The sulfur content of galena makes it extraordinarily brittle and reactive to chemical treatment. Miners and workers in extraction plants may encounter deadly galena poisoning. Currently, lead contamination of public water supplies is a localized, but severe problem in the U.S. IQ suppression is one of many toxic effects of lead poisoning, especially in children.  Galena has a cubic structure, and, if hit with a hammer, the crystal will shatter into multiple smaller replicas of its original shape.

6. Asbestos (Chrysotile and Amphibolite). Asbestos is not a manmade product, but one of the most terrifying minerals on earth.  Asbestos conducts full-scale mechanical sabotage on the human lung.  It is composed of silica, iron, sodium and oxygen.  Asbestos, being heat and flame resistant, has long been used for insulation and protective purposes. Both mining operations and natural aging and abrasion of asbestos insulation result in thousands of tiny, fibrous crystals that can become airborne and lodged in the human lung. Recurring, chronic irritation of the lung by these crystals results in pulmonary fibrosis and may lead to mesothelioma, a deadly form of lung cancer.  Many humans carry some asbestos fibers in their lungs.  Results of exposure to asbestos fibers were discussed by John Higginson, MD, a Geographic Pathologist at the University of Kansas, over 50 years ago.  His studies began with discovery of exposure of adults and children to airborne asbestos crystals originating from pilings formed by asbestos mining in South Africa.

5. Arsenopyrite, fool’s gold with a difference. Fool’s gold, pyrite, is iron sulfide.  Add a heavy dose of arsenic and you have Arsenopyrite.  Heating or any other way of altering Arsenopyrite results in release of lethally toxic, corrosive, carcinogenic vapors characterized by a strong garlic odor.  Arsenic, in very small doses given over prolonged periods of weeks and months, used to be the poison of choice by those of murderous intent, but with the advent of easy detectability has fallen out of favor.

4. Torbernite, the mineral from hell. The prism shaped green crystals of Torbernite are formed through a complex reaction between phosphorous, copper, water and uranium, and are found as secondary deposits in granitic rocks. Warning—these stunning crystal displays are not for keeping on your desk as paper weights, due to uranium decay, like a pocket-sized Chernobyl, not to mention emission of radon gas capable of inducing lung cancer.  Since torbernite can occur in granite, your stylish granite countertops at home may glow in the dark.  The bright green crystal blooms of torbernite were used by prospectors as indicators of uranium deposits.

3. Stibnite is antimony sulfide, but it looks like silver. For that reason, the huge, shining metallic crystals were once fashioned into magnificent eating utensils.  Unfortunately, the crystals were laced with antimony, causing food poisoning of the worst kind, death.  Today, even in collections, stibnite utensils or crystals should be handled with great care.  Hand washing is recommended after even minimal contact.  Mines near Oksaku, Japan produce the best stibnite crystals in the world.

2. Orpiment. Composed of arsenic and sulfur, the lethal and chemically reactive orpiment crystals are found growing below the surface in mineral formations, often near hydrothermal vents. It may crumble into dangerous powder when exposed to light.  Holding the crystals in your hands may release the carcinogenic, neurotoxic powder.  Like cinnabar, the Chinese made extensive use of orpiment, to terrifying ends.  Arrows would be rubbed on crushed samples of these stones and then launched to poison the enemy.  Orpiment was once used as a primary component of ochre paint, no doubt poisoning many of the artists who used it.

1. Cinnabar, mercury sulfide, is the most toxic mineral to handle on Earth. The name itself means dragons blood.  Cinnabar is the main ore of mercury.  Forming near volcanos and sulfur deposits, the bright red crystals signal danger.  Cinnabar may release pure mercury if disturbed or heated, causing tremors, loss of sensation and death.  In the Middle Ages and late 1700s, being sent to work in Spanish mines containing cinnabar formations was considered a death sentence.  Cinnabar was used widely in China for ornamental food dishes.  Some ancient medical practitioners believed cinnabar held healing powers, prescribing it for certain conditions. 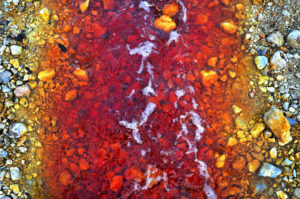 Prevention is worth a pound of cure.  First, avoid exposures to toxic minerals by identification and avoidance. If exposure occurs, seek medical attention as soon as possible.  Many of the toxic elements that are found in toxic minerals are subject to chelation, which means that the toxic elements can be bound to or otherwise disabled, followed by elimination from the body.

The history surrounding toxic minerals is truly interesting.  Frequently, knowledge of toxicity was ignored or suppressed.  Today, we are exposed to mercury in amalgam dental filings and vaccines, and to chemotherapy agents so toxic that it is hoped that the fast growing cancer cells will be poisoned faster than the slower growing normal cells.  This knowledge too, is frequently ignored or suppressed.  Many sources of information regarding toxic minerals (crystals) and elements are easily found by computer search.