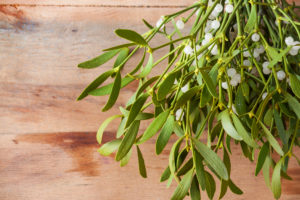 Mistletoe (Viscum album) is a poisonous, semi-parasitic plant that grows on various host trees native to Europe and Western Asia. Its medicinal use dates back centuries to the ancient civilizations of the Druids and Greeks. Today, preparations of its extracts are some of the most common complementary therapies used in oncology worldwide. With over 200 clinical studies to date, there’s no denying its safety and utility in cancer care.

The mistletoe plant blooms in winter and has a unique spherical growth pattern that, interestingly, mimics a tumor. Interestingly enough, it also grows independent of sun and gravity. It contains numerous active constituents, but its effects on the immune system and the tumor-inhibiting properties are primarily due to a group of compounds called lectins. Different mistletoe products contain varying amounts of these lectins and are thus indicated for different conditions or tumor types.

The most common delivery method of mistletoe is via subcutaneous injection at a frequency of two to three times per week. Once in the system, its effects take hold on several different levels. First and foremost, it stimulates an immune response which can be observed by a localized skin reaction around the injection site, as well as a rise in body temperature. As it recruits and activates immune cells, it also can induce apoptosis (programmed cell death) in cancerous cells and block angiogenesis (new blood supply). In addition, mistletoe extracts have been shown to stabilize and protect the DNA of healthy cells against damage caused by other cytotoxic therapies. These attributes make mistletoe a beneficial therapy for cancer patients at all stages of disease.

Many of the clinical studies examining mistletoe use in cancer patients have shown improved outcomes, both in conjunction with conventional treatments and as a stand-alone adjuvant therapy. Another compelling benefit, which has been observed in a multitude of clinical trials, is improved quality of life measures. Among those are fewer or less severe side effects from chemotherapy such as fatigue, depression, nausea, and vomiting, as well as improved emotional well-being and concentration. In addition, mistletoe therapy itself has very few side effects—the most common ones being mild soreness and inflammation at injection sites, headache, fever, and chills.

Despite mistletoe’s long track record of clinical use in Europe and several Asian countries, it has yet to be fully adopted by Western medicine. According to the FDA, it remains in a nebulous category of unproven biologic therapies. However, in 2016 it was approved for a large phase I study at the Johns Hopkins Sidney Kimmel Comprehensive Cancer Center, where a large cohort of cancer patients is to be enrolled and given mistletoe alongside conventional treatments. Hopefully, published results of this study will bring awareness and acceptance of the benefits of this therapy and its broad application across the field of oncology.

Let’s Get Started! Request An Appointment:

To request an appointment, please fill out the form below. We will be in touch about appointment times and dates. We look forward to meeting you!