Corresponding Author: Nina A. Mikirova, e-mail: nmikirova@riordanclinic.org
Source of support: Departmental sources
Background: Many natural compounds were tested for the ability to suppress viral replication. The present manuscript details an analysis of high dose vitamin C therapy on patients with EBV infection.
Material/Methods: The data were obtained from the patient history database at the Riordan Clinic. Among people in our database who were treated with intravenous vitamin C (7.5 g to 50 g infusions) between 1997 and 2006, 178 patients showed elevated levels of EBV EA IgG (range 25 to 211 AU) and 40 showed elevated levels of EBV VCA
IgM (range 25 to 140 AU). Most of these patients had a diagnosis of chronic fatigue syndrome, with the rest
being diagnosed as having mononucleosis, fatigue, or EBV infection.
Results: Our data provide evidence that high dose intravenous vitamin C therapy has a positive effect on disease duration and reduction of viral antibody levels.
Plasma levels of ascorbic acid and vitamin D were correlated with levels of antibodies to EBV. We found an
inverse correlation between EBV VCA IgM and vitamin C in plasma in patients with mononucleosis and CFS
meaning that patients with high levels of vitamin C tended to have lower levels of antigens in the acute state
of disease.
In addition, a relation was found between vitamin D levels and EBV EA IgG with lower levels of EBV early antigen IgG for higher levels of vitamin D.
Conclusions: The clinical study of ascorbic acid and EBV infection showed the reduction in EBV EA IgG and EBV VCA IgM antibody levels over time during IVC therapy that is consistent with observations from the literature that millimolar levels of ascorbate hinder viral infection and replication in vitro. 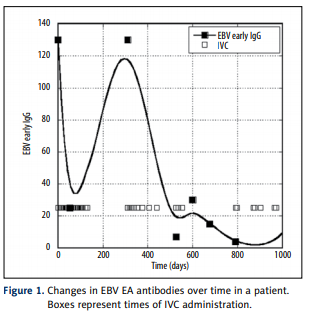