Cross-Sectional Analysis of Pyrroles in
Psychiatric Disorders: Association With
Nutritional and Immunological Markers

Psychiatrists started using urine pyrroles (hydroxyhemopyrrolin-2-one, HPL)
to diagnose psychiatric disorders many years ago. The biological origins of HPL are not known, nor
are the causes of elevated urinary pyrrole excretion well understood.
Methods: In the present study we analyzed the level of pyrroles in 148 patients with schizophrenia,
135 patients with bipolar disorder, 97 patients with depression, 119 patients with attention deficit
hyperactivity disorder, and compared these data with the results of pyrrole tests for patients with
non-psychiatric conditions and healthy volunteers.
Results: According to our data, urinary pyrrole concentrations tended to be high in patients with
psychiatric disorders, but elevated level of pyrroles was not specific for only these patients. We found
evidence of an allergy related component in the fact that elevated pyrrole levels were significantly
more prevalent in subjects with elevated histamine values. A role of intestinal bacteria, or imbalances in intestinal bacterial metabolism, was also suggested based on the found relationship between
elevated pyrrole levels and elevations in indicans and urobilinogens. In addition, our data demonstrated that subjects with severely elevated pyrrole levels were deficient in nutrients such as zinc,
vitamin B3, and vitamin C.
Conclusion: Thus, pyrrole excretion seems to be a component of illness in general and not strictly
psychiatric disorders.

Background
Interest in pyrroles as markers of psychiatric disorders started Dr. Abram Hoffer’s
discovery that “Mauve Factor”, a pyrrole
named for its lavender appearance in urine
chromatograms stained with Ehrlich’s
reagent,1
was prominent in urine samples
from schizophrenics.2,3 After considerable
efforts,4-10 Mauve Factor was determined to
be the hemopyrrole derivative hydroxyhemopyrrolin-2-one (HPL). Hoffer claimed
that HPL tended to decrease when a patient
recovered from illness, and increased when
illness reappeared; moreover, treatments
with vitamin B6 and zinc were reported to
decrease HPL levels and were associated
with patient recovery.11 Some psychiatrists,
particularly those with interests in orthomolecular medicine, have used HPL as a clinical
tool for diagnosing and following the progression or remission of mental illness.11-17
Data from these studies suggest that roughly
one-third of schizophrenia patients tested
had elevated pyrroles, but high urine HPL
levels were not limited to schizophrenia, as
a variety of conditions and stresses were associated with urine pyrrole excretion.
The biological origins of HPL are not
known, nor are the causes of elevated urinary pyrrole excretion understood. Proposed mechanisms for HPL formation and accumulation in the body include intake from
dietary sources, heme breakdown, or altered
heme biosynthesis, the latter perhaps occurring with the aid of gut flora.18 Irvine has
proposed that HPL is a metabolite of heme
synthesis intermediates porphobilinogen
and prophyrins, as these are structurally very
similar to HPL.9
Increases in pyrrole levels
and excretion may occur as a result of stressinduced changes in intestinal permeability,
which in turn leads to increased pyrrole absorption. To the extent that pyrrole excretion
may be an indicator of heme breakdown due
to emotional stress, oxidative stress, or nutrient deprivation, a study of the correlation
between urinary pyrroles and nutrient levels
should be of interest.
At the Riordan Clinic, urinary pyrrole
measurements have been part of the protocol for diagnosing psychiatric disorders and
other disorders for decades. Access to the
clinic’s database has enabled us to examine
pyrrole levels in patients with a variety of
disorders and to see how they correlate with
the concentrations of other key nutrients
or metabolites. The present manuscript describes our analysis and evaluation of these
data, and provides some assessment of the
potential value of monitoring pyrrole levels
in patients with psychiatric disorders.
Methods
All laboratory tests were conducted by
the Riordan Clinic Bio-Center Laboratory
(Wichita, KS), a licensed and certified medical laboratory (http://www.riordanclinic.
org/laboratory/catalog.pdf ). Handling of
laboratory data by our institute is done in full
compliance with HIPAA regulations. Assay
methods for the various vitamins, minerals,
and lipids for which data are presented here
were conducted by the Bio-Center Laboratory using standard methodologies. Urine
HPL levels was quantified using a colorimetric assay, provided precautions are taken
to keep it stable prior to and during the assay.
Statistical analyses were carried out using the
Excel spreadsheet program and graphs, with
regression data fits where appropriate, were
constructed using the Kalaidagraph program
(Synergy Software, Reading PA).
Inclusionary criteria used were patients
with a diagnosis of psychiatric disorder who
came for treatment at the Riordan Clinic
and had evaluations that included nutritional and pyrrole tests. No other demographic
data except age and sex were recorded for
this study.
The diagnosis of psychiatric disorder was
made by medical doctors using Diagnostic
and Statistical Manual of Mental DisordersIV criteria based on direct observations plus
reports from parents and other care takers.
Results
We analyzed urine pyrrole data in 119
patients with attention deficit hyperactivity disorder (ADHD), 148 patients with
schizophrenia, 135 patients with bipolar disorder and 97 patients with depression. We
initially examined amino acids, key precursors for neurotransmitters. We also investigated other parameters consider relevant to
psychiatric disorders, such as toxic metals,
essential minerals, and fatty acids. Tests for
psychiatric disorder groupings show elevated average values of hair aluminum, lead (in
patients with schizophrenia), iron (total and
hair), arachidonic acid to EPA ratio, omega
3 to omega 6 fatty acid ratios, and urine pyrroles. Deficiencies were found in the levels
of essential metals magnesium, zinc and
copper (serum). Some deficiencies and the
metabolic imbalances in fatty acid, amino
acid, mineral, and pyrrole levels in ADHD
patients were analyzed previously.19
The percentage of patients with increased levels of pyrroles in comparison with
patients without specific diagnosis (134 subjects) is shown in Figure 1 (p.3).
According to these data the percentage
of patients with the levels of pyrroles higher
than 20 ug/dL was 48% for ADHD patients,
22% for patients with schizophrenia, 30%
for patients with bipolar and depression and
26% for patients without specific diagnosis.
Pyrrole distributions in subjects with
illnesses were analyzed by illness category,
along with the distribution that would be 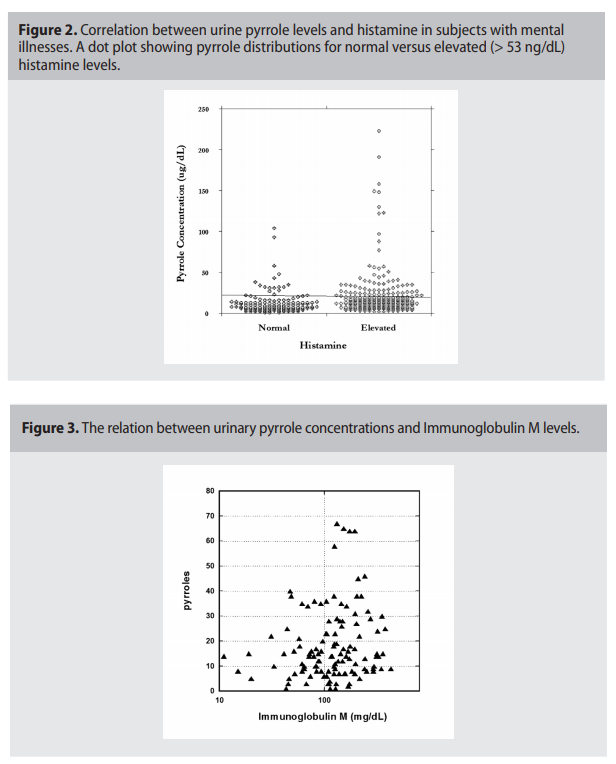 cases, elevated pyrroles were associated with
elevated levels, supporting the hypothesis
that intestinal bacteria overgrowth may be
associated with excessive pyrrole excretion.
To determine if increased pyrroles secretion is accompanied by nutritional deficiencies, we compared urinary pyrrole concentrations with vitamins and minerals in
blood for cases where both were measured
on the same visit. Vitamins are natural barriers against infection and allergic reactions,
as well as chemical balance of essential minerals. Examples of a relationship between
urinary pyrroles and vitamin C or zinc are 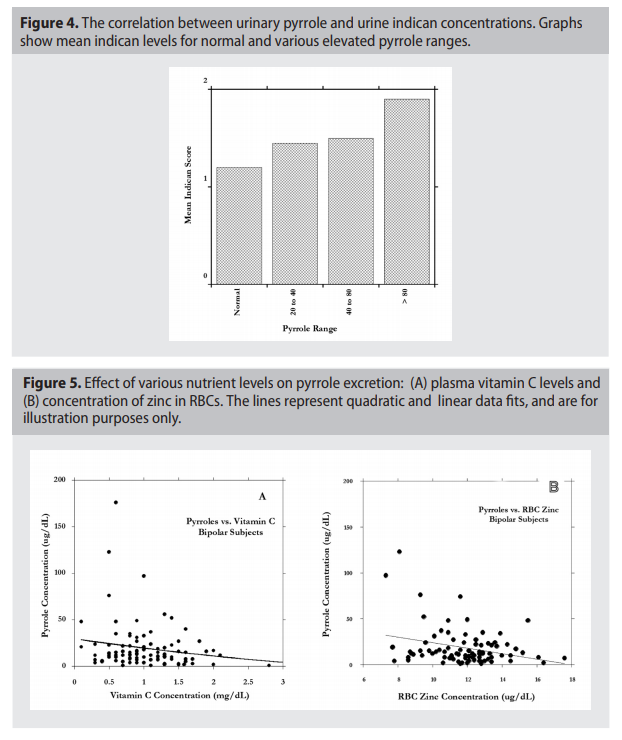