Background: The importance of consumption of vitamin C (ascorbic acid) for human health is well known, as adequate availability of vitamin C is necessary for proper immune functioning, suppression of virus replication, suppression of
inflammation, and in the process of healing in many chronic diseases.

The oral route is the most convenient way to administer vitamin C. However, it has been shown that plasma ascorbic
acid levels following oral administration are tightly controlled. A different method of administration of ascorbic acid is
proposed by means of liposomal encapsulation, with the goal of improving the crossing of biological membranes and
increasing the access of ascorbate to blood and tissue.

Design We studied the concentrations of reduced and oxidized ascorbate in plasma and peripheral blood mononuclear cells (PBMCs) after of 25 grams of ascorbate taken orally in liposomal form, and after 25 grams administered intravenously, in two adult humans. The experimental protocol was approved by the Institutional Review Board at the Riordan Clinic.

Conclusions: Consistent with earlier studies, our data support the fact that pharmacological concentrations of ascorbate in blood can be achieved by intravenous administration, and not by intake of encapsulated ascorbate. Comparisons of the levels of ascorbic acid in plasma achieved by liposomal ascorbic acid intake demonstrated that this method is not more effective than oral administration. The study was ultimately limited by the small number of participants and demonstrates the need for further careful research.

The importance of the consumption of the vitamin C for human health is well known, as humans do not have gulonolactone oxidase, the enzyme required for vitamin C biosynthesis. Many studies demonstrate that adequate availability of vitamin C is necessary for stimulation of certain enzymes, collagen biosynthesis, hormonal activation, detoxification of histamine, proper immune functioning, suppression of virus replication, suppression of inflammation, and in the process of healing many chronic diseases (Levy, 2012).

The oral route is the most convenient way to administer nutraceuticals, including vitamin C. However, it has been shown that plasma ascorbic acid levels following oral administration are limited and have maximum concentration around 220 uM, depending on the dose administered (Levine, Conry-Cantilena, Wang, et al. 1996; Padayatty, Sun, Wang, Riordan, et al., 2004). Ascorbic acid bioavailability is largely determined by rates of intestinal absorption and further influenced by renal reabsorption and excretion (Levine, Padayatty, & Espey, 2011; Levine, Rumsey, Daruwala, Park, & Wang, 1999; Wang, Mackenzie, Tsukaguchi, et al., 2000). As the result, it is difficult to increase plasma and tissue concentrations by oral intake of ascorbic acid. For treatment of certain conditions such as cancer, arthritis, viral infections and others, intravenous administration of ascorbate can produce concentrations that cannot be achieved orally (Riordan, Riordan, & Casciari, 2000).

Now a different method of administration of ascorbic acid is proposed by utilizing liposomal encapsulation (Panagiotou, & Fisher, 2013). The goal of the utilizing encapsulated ascorbic acid is to improve the penetration of various biological membranes (mucosa, epithelium, or endothelium), with further diffusion through the plasma membrane and finally gaining access to the appropriate cells.

Liposomes were first discovered by Bangham in 1965, and the first liposomal pharmaceutical product, Doxil, received FDA approval in 1997 for the treatment of chemotherapy refractory AIDS-related Kaposi’s sarcoma (Deamer, 1978; Szoka, & Papahadjopoulos, 1978). During the past years liposomes have received a lot of attention as pharmaceutical carriers of great potential. Liposomes are able to encapsulate lipophilic or hydrophilic substances within their lipidic layers or in their inner aqueous compartment. Advantages of liposomal encapsulation include accelerated intestinal absorption, increased stability of the pharmaceuticals, protection of the gut from potentially irritating agents, and greater bioavailability of the pharmaceuticals (Kraft, Freeling, Wang, & Ho, 2014). Studies have shown that liposomal formulation (method of preparation, size, and type of encapsulated drug) has a great influence on the efficiency of drug delivery (Otake, Imura, Sakai, & Abe, 2001; Uhumwangho & Okor, 2005; Jiskoot, Teerlink, Beuvery, & Crommelin, 1986).

Currently there are about 12 liposome-based drugs approved for clinical use and more are in various stages of clinical trials (Chang & Yeh, 2012; Torchilin, 2005). Most liposomal drug formulations are approved for intravenous application. Other administration routes such as intramuscular delivery have also been approved. Oral delivery of drugs has been examined; however, this route of administration is more troublesome due to the potential for liposomal breakdown following exposure to bile salts (Shaji & Patole, 2008). The studies of the oral liposomal formulations of ascorbic acid include a study published by Devis and coworkers (Davis, Paris, Beals, et al., 2016), in which the authors compared oral absorbance of liposomal ascorbic acid to oral absorbance of a non-encapsulated form, and intravenous delivery.

We studied the concentrations of reduced and oxidized ascorbate in serum and cells after 25 grams of ascorbate taken orally in liposomal form and after intravenous injections of 25 grams in two adult healthy humans. The experimental protocol conformed to the standards set by the Declaration of Helsinki of 1975, as revised in 1983, and was approved by the IRB at the Riordan Clinic. The nature, purpose, and risks of the study were explained to each research participant before written informed consent was obtained.

The level of ascorbate and dehydroascorbic acid was measured by a method based on Cayman’s ascorbic acid assay and the original study of Vislisel and coworkers (Vislisel, Schafer, & Buettner, 2007). This method of analysis of total intracellular ascorbate and oxidized ascorbate is based on the well-known condensation reaction of dehydroascorbic (DHA) with o-phenylenediamine (OPDA) to form a highly colored product that can be detected by fluorescence. In theassay, ascorbate must be oxidized to DHA. This traditionally has been done with ascorbate oxidase. In this assay the oxidation of ascorbate is accomplished by using Tempol. The level of ascorbate in plasma and cells was analyzed by fluorescence (Fluorolog-3, Jobin Yvon Inc) by exciting at wavelength range of 340-350 nm and measuring an emission peak at wavelengths 420 nm – 430 nm.

PBMCs PBMCs were separated by Ficoll-Pague procedure according to the company’s recommendations. Blood was analyzed as soon as possible and kept on rocker to prevent coagulation. Cells were washed twice with PBS, and the cell count was performed by standard lab procedure by hemocytometer. Cell pellets (3-5 million cells) were frozen at -80°C to rupture the membranes. After freezing during 30 min, cell pellets are thawed and extracted with 200 µL MeOH/H2O/DTPA (75/22.5/ 2.5, v/v/v), incubated on ice for 10 min, and then centrifuged at 12000 g for 5 min. Supernatant can be stored at -80°C until analysis. Standard deviation of ascorbate measurements in plasma and cells was in the range of 10%-15%.

Results of measurements before and after IVC for both subjects are shown in Figure 1. Data are presented for baseline and after treatment levels of ascorbate, DHA, and the ratio of reduced to oxidized ascorbate.

As shown by many research studies, PBMCs concentrate ascorbic acid in high levels and against a concentration gradient, suggesting that this substance has an important role in these cells’ physiological function (Leibovitz & Siegel, 1978; Prinz, Bortz, Bregin, & Hersch, 1977).

In our study, we compared the uptake of ascorbic acid by cells after intravenous and liposomal ascorbic acid supplementation. The results of our measurements for two patients are shown in Figures 3(a, b). In PBMCs, IVC injections increased concentration of ascorbate from 60 um per 1 million cells (um/M) to 120 um/M for first subject and from 38 um/M to 60 um/M for the second subject. After the same dosage of liposomal ascorbate the intracellular concentration of ascorbate was increased from 37 um/M – 42 um/M to 48 um/M-54 um/M. 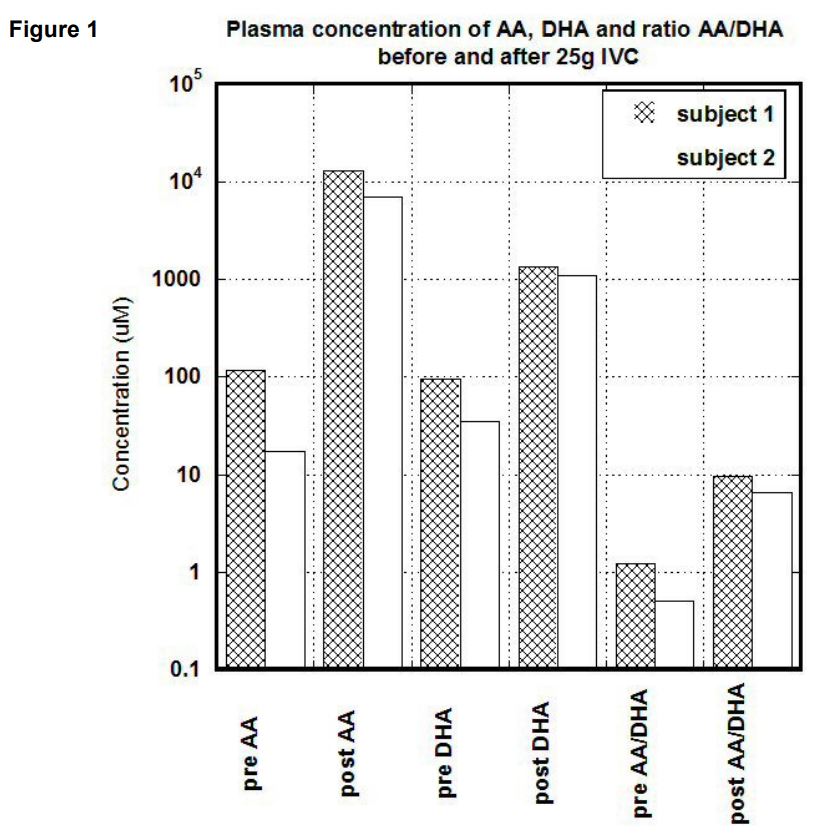 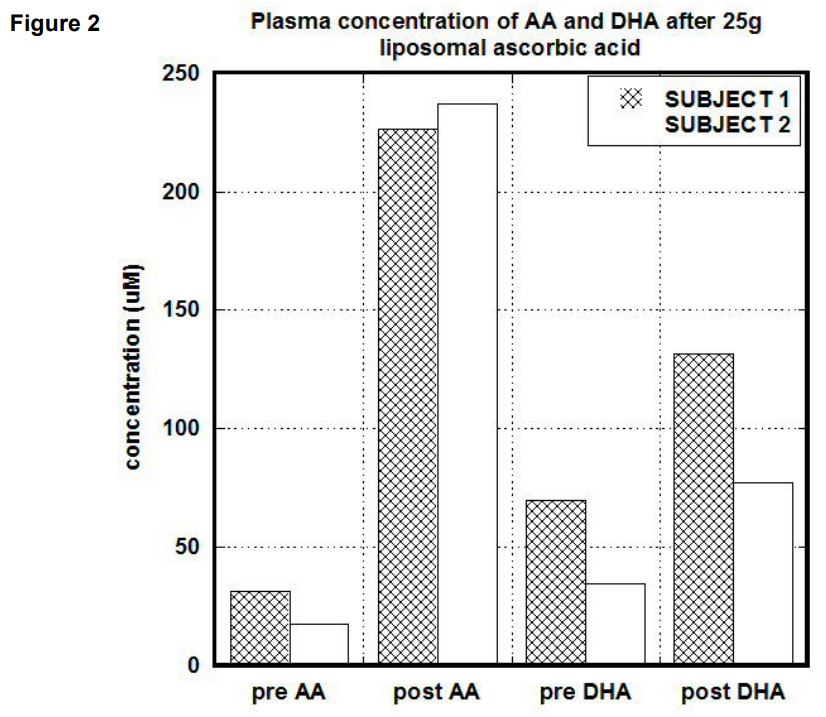 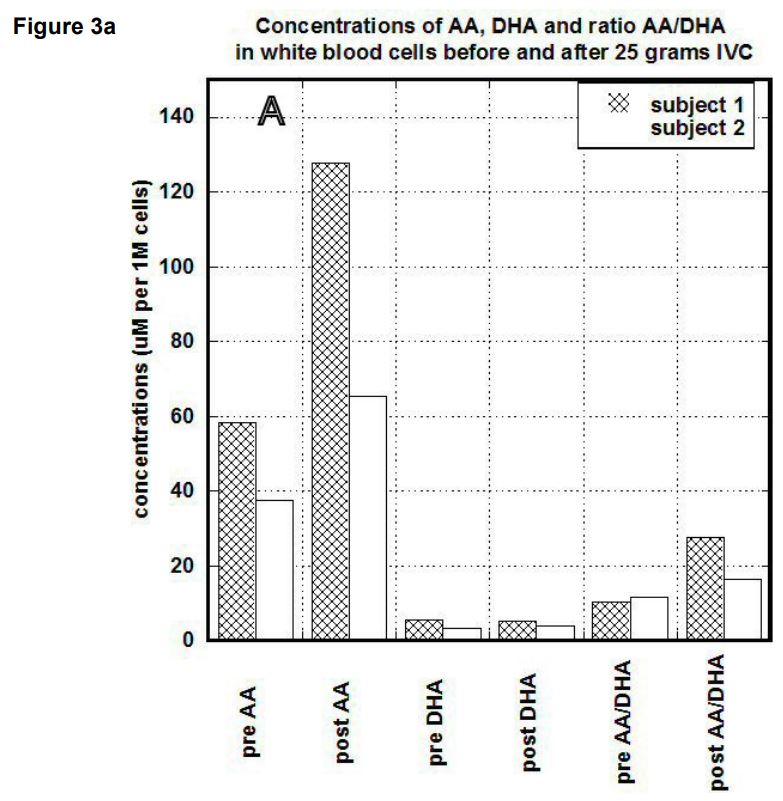 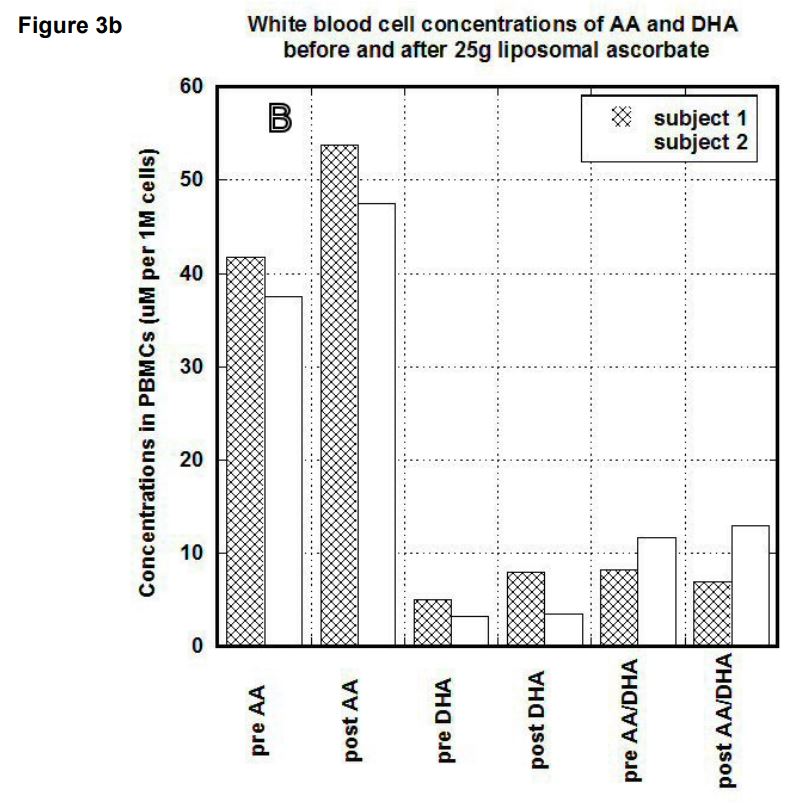 As it was described before, liposomal formulations were developed for improvement of the delivery systems intended to protect drugs/supplements from pH changes, digestive enzymes, and bile salts in order to improve their absorption. The purpose of the liposomal coating of ascorbic acid is to increase the gastrointestinal absorption by the mechanism of dissolving liposomes through the lining of the stomach and enhancing penetration into the bloodstream and cell walls. This should result in a higher level of ascorbate absorption into the body than through non-encapsulated oral administration.

According to our data, concentration of ascorbate in plasma, after administration of 25 grams intravenous vitamin C, increased from 112 to 140 times. The oral liposomal intake of 25 grams of ascorbate resulted in increasing concentrations in plasma seven times and reached in an average value 230 uM. According to another study (Hickey, Roberts, & Miller, 2008), this level in plasma can be achieved by less doses of standard ascorbic acid supplementation. The concentration of dehydroascorbic acid in plasma was raised 14 -20 times after intravenous ascorbate and 2 times after liposomal ascorbate.

The injection of 25 grams ascorbate intravenously resulted in the increase of ascorbic acid concentration in cells 1.7-2.2 times. Supplementation by the same dosage of liposomal ascorbate resulted in a slight increase in the intracellular levels of ascorbate (25%-30%).

Our data demonstrated that both routes of ascorbic acid supplementation changed the content of intracellular ascorbic acid, but did not change the level of DHA, indicating that if mononuclear cells take up DHA by a sodium independent transporter systems, in addition of an intake of ascorbate by a sodium dependent transporter, within the cells DHA is immediately reduced back to ascorbate.

The reason for a great difference in the concentrations of ascorbate delivered intravenously vs encapsulated in liposomes is that the oral administration of liposomes requires high stability. According to the studies (Rogers & Anderson, 1998; Taira, Chiaramoni, Pecuch, & Alonso-Romanowski, 2004; Hermida, Sabés-Xamaní, & BarnadasRodríguez, 2009), the environment of the gastrointestinal tract can disrupt a large percentage of these carriers. The concerted action of duodenal enzymes and bile salts destroy the lipid bilayer of most liposomes, especially those composed of unsaturated lipids, and consequently the transported drug/supplement, either encapsulated or bound at the membrane, is released before reaching the absorption site (Chiang & Weiner, 1987; Dapergolas & Gregoriadis, 1976; Patel & Ryman, 1976, Rowland & Woodley, 1980; O’Connor, Wallace, Iwamoto, Taguchi, Sunamoto, 1985). Hydrolysis, oxidation of phospholipids and liposome aggregation are also common causes of liposome instabilities (Allen & Moase, 1996; Immordino, Dosio, & Cattel, 2006; Shaji & Patole, 2008). The hydrolytic degradation of phosphatidylcholine can be increased by addition of an antioxidant, in our case ascorbic acid. Also efficacy of absorption depends on the size of particles, as large liposomes cannot be taken up by the M-cells (microfold cells), and small liposomes cannot elicit efficient internalization and absorption.

In summary, our data support the fact that pharmacological concentrations of ascorbate in blood can be achieved only by intravenous administration of ascorbate.

The author declares that she has no competing interests.