Many people hear about the different stages of breast cancer and know that the higher the number, the more serious the case. But, what do the stages really mean and how do they drive treatment decisions? We thought it might be helpful to clarify meaning of the different stages of breast cancer and discuss where lifestyle factors and integrative medicine can have the biggest impact.

What is breast cancer staging?

Staging is basically a classification system developed by conventional medicine doctors to establish treatment guidelines based on the anatomical spread of cancer. The stages of breast cancer range from zero up to stage four. 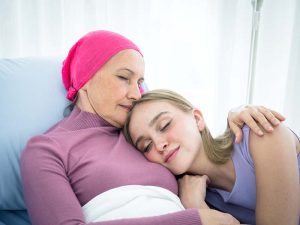 Stage Four
Stage four means that the cancer has spread to other parts of the body and has invaded other organs and tissues such as the, liver, lungs, brain, and bones. This stage is also referred to as advanced or metastatic cancer.

Stages Two and Three
Stages two and three indicate that cancer has grown more deeply and into nearby tissue, but is still largely confined to one area. It may also indicate that it has begun to invade the lymph nodes.

Stage One
Stage one, also known as early-stage cancer, means that cancer has not grown into nearby tissue and has not invaded the lymph nodes or other parts of the body.

Stage Zero
Not all cancers have stage zero, but breast cancer does. This stage is called ductal or lobular carcinoma in situ which means “in place.” This stage implies that cells with cancerous features are present, but have not yet become invasive. What we know about this stage is that it’s quite common, but only about one in five of these in situ carcinomas will go on to actually become invasive.

The traditional approach, unfortunately, will often treat this stage as if it is invasive, using things like surgery, radiation,and possibly hormone blocking drugs even though it is unlikely to be life -threatening. The controversy with using invasive treatments is that it may help 20% of the patients with stage zero breast cancer, while being an over-treatment for the other 80%.

There are other risk factors that can impact whether the cancer is going to progress or not. With an early-stage diagnosis, there is a lot that a person can control that may slow down the progression of the tumor and keep them at a lower stage.

Over the course of our duration in practice, we’ve seen women with stage zero breast cancer who have opted not to do conventional treatment, even though they were recommended to. Those patients are the ones that tend to be well suited for going all in from an integrative approach. This shows promise for different approaches for stage zero cancers that go beyond surgery, radiation, chemo and hormone blockers.

Of course, every case is different and the Riordan Clinic always advises a full discussion with your medical provider before deciding which treatments are best for you.

The Patient’s Power to Balance Hormones and Feel Better

Posted on February 11, 2022 Author: Jenny Bradley Have you ever had one of those days where the moodiness hits and it feels like you are the passenger in an ...
VIEW BLOG ARTICLE

Spotlight on Breast Health and Early Screening for Breast Cancer

Posted on October 5, 2020 You may know that October is Breast Cancer Awareness month, but any time of year is a good time to focus on screening and prevention. ...
VIEW BLOG ARTICLE