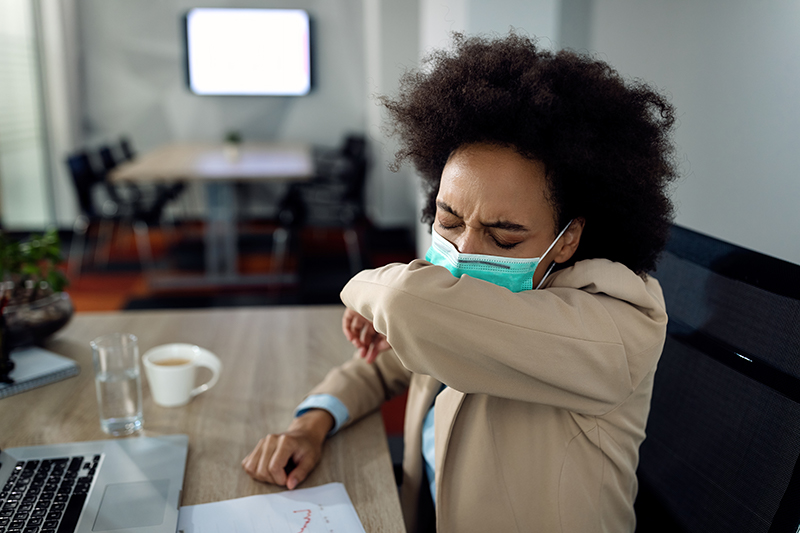 I wanted to present this brief case-history of what I believe is my first Long Covid patient to give our Health Hunters readers a glimpse of what may become a huge wave of chronic, complex illness (CCI) in the wake of the pandemic.

This patient illustrates a phenomenon that I have witnessed for the three decades of my medical practice at Riordan Clinic and something I touched on in the previous article: treating the symptoms of chronic, complex illness with medications alone rarely corrects the underlying causes of the illness.

Throughout my years, I have seen many acute infections trigger long-term chronic illnesses (think Epstein Barr, Lyme disease, persistent shingles). It appears that Covid-19 may be doing the same thing. My intention is not to scare you, but rather raise your awareness of potential complications of this disease. My hope is that if you have been infected with the Coronavirus, you will take proactive steps toward rebuilding your health so that you don’t have to deal with the long-term effects.

Patient General Information
This patient is a 32-year-old African American female. She is a married, mother of four healthy children that were all delivered via C-section. She had no prior illnesses.

Acute Phase
In February of 2020, the patient developed a high fever, night sweats, severe headache, and dizziness. Other symptoms included tightness and heaviness in the chest. She reported that it felt like her lungs were swelling, and she began to have trouble breathing.

An X-ray of her chest showed no pneumonia, but her shortness of breath persisted. She remained acutely ill but stayed at home for two weeks. Covid testing was not available at that time.

Chronic phase
Gradually the patient’s fever and night sweats disappeared. While she never lost her sense of smell, her sense of taste was greatly decreased. Severe fatigue, generalized weakness, global pain, and pain in the chest wall set in. She became so tired that she was unable to care for her four children, and they were sent to live with extended family until she recovers.

Several bodily systems were affected, and many new symptoms developed which I will summarize below.

Respiratory symptoms
To this day the patient says she cannot catch her breath and it is very disconcerting for her. She does not experience any coughing or fever, but any activity or effort is accompanied by a worsening of her shortness of breath. She said that her O2 saturation (measured at home with a pulse oximeter) goes up and down with a low of 89%. Her sinuses are chronically congested.

Cardiovascular symptoms
The patient developed hypertension, which seems to come and go. She has been taking a beta-blocker off and on to control it, but the medicine makes her more fatigued.

Sleep Disturbances
The patient hasn’t slept well since her initial infection 11 months ago. She says that she cannot lay flat without feeling short of breath. She has to prop herself up with a bundle of pillows to prevent the sense of choking while she tries to sleep.

Brain and Mood Changes
The patient said that thinking and remembering things has become frustratingly difficult. She has frequent dizziness that now worsens her chronic state of severe anxiety. Her anxiety is becoming further complicated with a deepening state of depression. She takes a small dose of Lexapro at bedtime for the depression. Other anxiety medications have not helped her much.

Gut Imbalance
The patient’s digestion has been severely affected. She is chronically bloated and suffers acid reflux. She says that anything she eats “wants to come back up.” Her physician ordered an endoscopy that revealed H. Pylori.

She was prescribed doxycycline, omeprazole, and metronidazole but stopped taking them after ten days because they were worsening her extreme fatigue. Her appetite has gradually improved, but she still struggles with constipation.

Lab Findings
During a recent hospitalization in her hometown, an array of blood tests and radiologic tests were done. No specific diagnosis was made from these tests. Subsequent Covid swabs came back negative and a Covid antibody test was not performed. Her B12 level was very low, but was not treated. Vitamin D levels were very low and she was given 1000 iu of D3.

The patient underwent evaluation with the Real Health Discovery profile and Covid antibody lab tests. Results are pending at the time of this writing. She was on campus for three days of treatments outlined below.

Day One
Patient was treated with Ultraviolet Blood Irradiation followed by an IVC push. She was also given B12 via intramuscular injection. We recommended she begin taking oral Vitamin D3/K2 daily.

Day Two
The B12 injection was repeated and a higher dose of vitamin C was administered intravenously followed by a glutathione push.

Day Three
The B12 injection was repeated again. A second treatment of Ultraviolet Blood Irradiation was administered followed by another IVC with added magnesium.

Prescription Medication
A ten day regimen of Ivermectin was prescribed.

As mentioned we are still waiting for lab test results and the patient’s follow-up visit. We will be sharing the remainder of this story as it unfolds.