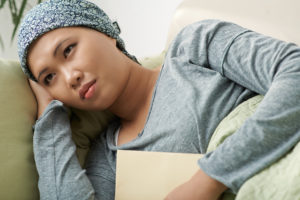 Fatigue is a common problem in cancer patients, both among those undergoing active treatment and in survivors. Some reports show that as many as 90% of cancer patients struggle with fatigue at some point in their journey and a prevalence of up to 45% in cancer survivors. The fatigue that comes with cancer, called cancer-related fatigue (CRF), is different from the fatigue of daily life. CRF causes disruption in all aspects of quality of life, and may be a risk factor for reduced survival.

By definition, CRF is a distressing, persistent, subjective sense of physical, emotional, and/or cognitive tiredness or exhaustion related to cancer or cancer treatment, that is not proportional to recent activity, and interferes with usual functioning. More and more, cancer centers are relying on integrative medicine practitioners to help manage this complex condition with complementary and alternative (CAM) therapies, as these have been shown to be the most promising interventions available at this time.

While the causes of CRF are not fully understood, it is generally thought to be a multifactorial condition and component of a symptom complex which may include depression, anxiety, and sleep disorders.

With CRF, sometimes there are measurable factors involved, such as anemia, nutritional deficiencies or hormonal imbalances. However, more often there are intangibles that may contribute to CRF, such as pain, stress, poor sleep patterns, deconditioning, and medication side effects. On top of all that, there is the fatigue that can be caused by cancer itself, as well as cancer treatments such as surgery, chemotherapy and radiation.

Given the complexity of the problem and the lack of objective measurement of what is primarily a subjective symptom, interventional trials have been somewhat limited.

What Can be Done?

Despite the lack of a universal objective measurement for CRF, research into effective interventions has continued to build and better inform clinicians on how to mitigate this highly prevalent condition. Several evidence-based therapies have been identified to potentially help improve CRF.  Let’s take a look at some of these:

CRF is one of the most distressing cancer-related symptoms and requires a clinician or team of clinicians to look at many underlying causes and interrelated conditions. Cancer patients are best served by working with an integrative practitioner who has knowledge of all of the CAM therapies indicated for CRF, and who continues to look at all potential underlying causes, even as the patient moves into long-term survivorship. As the understanding of cancer and its treatments evolves rapidly, so will our understanding of CRF and how to best manage it.

Posted on January 15, 2021 Author: Lucas Tims N.D. FABNO A question I’ve been getting a lot lately is “What exactly is a Naturopathic Oncologist?” I thought it ...
VIEW BLOG ARTICLE

Posted on September 2, 2020 Dr. Lucas Tims recently sat down with Chris Wark of Chris Beat Cancer. In this podcast interview, they discuss the pros and cons of ...
VIEW BLOG ARTICLE