“There’s something ‘BIG’ behind his left eye,” the pediatric ophthalmologist exclaimed.  “We have to get him to hospital now for an MRI!” February 14th, 2012, we were immediately rushed over to the hospital and  within a few hours, a pediatric doctor was trying to explain, “Your son has a very large tumor that is wrapped around his optic nerve, called a Glioma.” There were so many questions and very few answers. We were told only two options, “Either you can do chemo or not.” The depth of my stomach was churning! I later learned that this feeling was my intuition and I have relied on it to guide me throughout Hoyt’s journey. 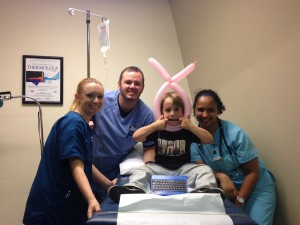 Hoyt was previously diagnosed with Neurofibromatosis 1 (NF-1) at three months of age, and at 16 months old, he was starting chemotherapy for a brain tumor. The standard drug cocktail protocol for NF-1 brain tumor is Carboplatin and Vincristine. He would go weekly for ten weeks, two hours each time, and then would continue with eight cycles consisting of four weeks on chemotherapy and 21 days off. We were told that it was very likely he would need blood transfusions and be in and out of the hospital throughout this time.

It didn’t take long to affect his tiny body. By 9 p.m. after his first treatment, he was vomiting. Scared and not knowing what was happening, we gave Hoyt his yellow sand bucket with Winnie the Pooh and friends on it, and taught him to use that whenever he became sick. The next day, his body became tender and he lacked  energy. By the fifth treatment his hair started falling out. Hoyt would reach up and pull hair out of his head, hand it to me and look at me as though to say “This just isn’t right!” I took him over to our cat and showed him he wasn’t alone, “Captain’s hair comes out too…. it’s shedding season!”

Hoyt would get MRI’s every three months, and with more growth by his third MRI, we were told that the chemotherapy was not helping and we were sent home to try to figure out our next move. I researched many hospitals seeking out NF clinics. We decided on Children’s Mercy in Kansas City. There we met with an oncology doctor, who we still see for MRI’s. We were informed that most NF-1 optic tumors were stable and do not affect the chiasm. The doctor was very concerned at the size of Hoyt’s, which was torturous on his left eye, extending into the chiasm and over onto the right optic nerve.  At the first meeting, even though the tumor had grown, we were sent back to Wichita to continue with the standard chemotherapy protocol.

We also had an appointment with Children’s Mercy’s ophthalmologist on our first visit and learned that Hoyt did not have any peripheral vision in his left eye.  It wasn’t known whether or not he could see anything at all out of it because he was unable to vocalize it. There was extreme nerve damage to the left opt 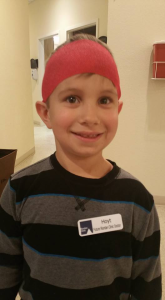 ic nerve; it was pale in color and could never be repaired. “The good eye is good and the bad eye is bad!”

Throughout his first year we had several visits with many different specialists. He remained a very strong boy and not once was he hospitalized. Even the doctor and nurses at chemotherapy were surprised. His quality of health was getting worse as time went on. He suffered from tremors, fatigue, sore body, a lot of nausea and many battles with bronchitis that were treatable at home.

Hoyt had been sick so much that we had to postpone a few MRI’s and it wasn’t until April 4th 2013, about six months since his previous MRI, we were able to go back to Kansas City for his MRI. He was only a few weeks away from completing his chemotherapy sessions.  There was not good news at all! The MRI showed BIG GROWTH in the chiasm; it was now in the hypothalamus and pituitary gland, the most dangerous place it could be. We were to stop the chemotherapy that he was doing and there was not a second protocol for NF-1 optic glioma! Now what?? I was so lost. An alternative that was discussed was radiation or a different type of chemotherapy that causes nerve problems, and can affect things like walking, hand movement, etc. But it would just be a guessing game. I asked many questions and in the depths of my stomach I knew that not one thing being mentioned was anything I was willing to put my little boy through. I decided that he would have quality of life over quantity! I also believe that Mother Nature has provided us with all that we need. I believe that Super Natural means More Natural. In other words, miracles are more natural and not synthetic! There had to be an answer and I cried out to be shown the way.

I read countless books and internet sites and the one that has changed our lives forever was a book by Ty Bollinger titled, “Cancer: Step Outside of the Box”. The end of his book he listed the top ten cancer clinics that he recommended in the world. My heart jumped with so much joy when one of the clinics mentioned… Riordan Clinic, in Wichita, Kansas!!  Oh my gosh, only one and a half hours away from me… I was on the phone immediately!

August 8th 2013  we walked into Riordan Clinic for the first time and met with Dr. Ron Hunninghake. I was very impressed and intrigued with how High Dose IV Vitamin C works and we started  IVC treatment that day through Hoyt’s port.

Hoyt’s next MRIs were miraculous. Hoyt’s tumor was showing either stability or shrinkage over the next two and a half years. As a whole, there has been significant shrinkage, there is no longer a tumor on his right eye and his sight remains extremely good in that eye. We did eventually find out that Hoyt was blind in his left eye. The tumor is no longer affecting the pituitary gland and hypothalamus. At the last MRI on February 18th 2016, we were told there was hardly a sign of the tumor in the chiasm. Now, this part really excites me; I was told that there was no way that the tumor on his left eye would shrink, yet I always believed in my heart that it will one day all be gone. Well, there was an ever so slight shrinkage this time on that tortuous tumor!! In fact Hoyt has remained so healthy and continue success using the HD IV Vitamin C that he does not have to return to Children’s Mercy for one year! They had even mentioned doing a clinical trial on him at our last visit. 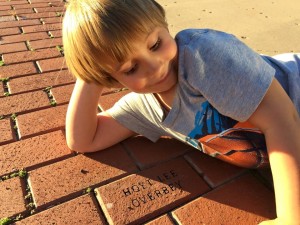 The advice I would like to share with everyone is, ‘Always follow your gut feeling (intuition) and believe whole heartedly in that feeling!’ This was not an easy journey for us, especially when the decision I was making was not for me, but for my son, and that made it even harder. I had to go against the medical profession and, believe me, they told me adamantly my son needed chemotherapy and that he should be on it. I believed so strongly in what I was doing. Yes, I would second guess myself often, but when I weighed the choices, I knew I was right to seek a natural therapy. There is so much proof out there, you must seek out the answers and not just go with conventional wisdom. The last and hardest thing that I had to learn and needed was patience. This was, and is, a one day at a time journey!

It is our goal to study IVC for treatment for NF-1 and optic gliomas and patient care grants to help other families pay for treatment. If you would like to help, please visit our donation site at RiordanClinic.org/donate/

Neurofibromatosis Type 1 (NF-1) is a tumor suppressor gene syndrome characterized by multiple cutaneous and plexiform neurofibromas. NF is the most common neurofibromatosis, occurring in one in 3,000 individuals. Although many affected people inherit the disorder, between 30-50 percent of new cases result from a spontaneous genetic mutation of unknown cause. It primarily affects the skin, nervous system and the eyes. There is currently no cure.

Patient Story: “Rheumatoid Arthritis Does Not Define Me”

Posted on June 5, 2020 Author: Erin Manning, MBA My journey with Rheumatoid Arthritis had a sudden start. The stiffness I felt in the pointer-finger on my ...
VIEW BLOG ARTICLE