Laropiprant is the Bad One; Niacin is/was/will always be the Good One 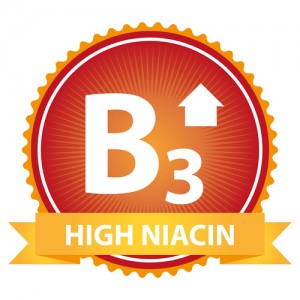 (OMNS July 25, 2014) Niacin has been used for over 60 years in tens of thousands of patients with tremendously favorable therapeutic benefit (Carlson 2005). In the first-person NY Times best seller, “8 Weeks to a Cure for Cholesterol,” the author describes his journey from being a walking heart attack time bomb to a becoming a healthy individual. He hails high-dose niacin as the one treatment that did more to correct his poor lipid profile than any other (Kowalski 2001). Many clinical studies have shown that high doses of niacin (3,000-5,000 mg plain old immediate release niacin taken in divided doses spread out over the course of a day) cause dramatic reductions in total mortality in patients that experienced previous strokes (Creider 2012). High dose niacin has also been clinically proven to provide positive transformational relief to many schizophrenics in studies involving administration of immediate release niacin in multi-thousand-milligram quantities to greater than 10,000 patients (Hoffer 1964; Osmond 1962). Most importantly, after 60 years of use the safety profile for niacin (especially immediate release niacin) remains far safer than the safest drug (Guyton 2007).

So why has the media suddenly presented the following niacin alarmist headlines in response to the most recent study in the New England Journal of Medicine?

“Niacin could be more harmful than helpful” – Telemanagement, 7/18/14

The truth of the matter is that the study quoted and used laropiprant (trade names: Cordaptive and Tredaptive). Laropiprant is a questionable drug and the results say next to nothing about niacin. The study compared over 25,000 patients treated with either niacin along with laropiprant, or placebo. The patients in this study had previous history of myocardial infarction, cerebrovascular disease, peripheral arterial disease, or diabetes mellitus with evidence of symptomatic coronary disease. The side effects observed in those who took the laropiprant-niacin combination were serious and included an increase in total mortality as well as significant increases in the risk for developing diabetes.

For responsible reporters, this should have raised the question of which compound, the drug laropiprant, or the vitamin niacin, is the culprit.

Such side effects have not been seen in over 10 major clinical trials of niacin involving tens of thousands of patients, not in over 60 years of regular usage of niacin in clinics across the country. However, niacin causes a warm flush on the skin. Some people find the warm niacin flush uncomfortable, although many people enjoy this temporary sensation. In this study, niacin was given in combination with laropiprant, a drug that prevents the niacin flush. By including a dose of laropiprant along with the niacin to eliminate the flush, the thought was that more patients could benefit from niacin without complaint. But in fact the niacin flush is healthy. A reduced flush response to niacin is a diagnostic for increased incidence of schizophrenia, and this assay is now widely available (Horrobin 1980; Messamore, 2003; Liu 2007; Smesny, 2007).

So what about the other half of the combo, the drug laropiprant?

So why did so many media outlets and even some MDs conclude that niacin was the problem? Simple: none of the headlines mentioned laropiprant, which is quite clearly the real culprit that caused the side effects reported. The simplest way to put it is to say that sensational stories promulgated by the media are quite often completely wrong. This suggests a hidden agenda.

Confusing and fantastical headlines can increase readership for hysteria-based business models. Which headline is likely to garner the greatest attention: “Laropiprant is a Dangerous Medication that has Not Been Approved by the FDA” or “Niacin Causes Serious Side Effects”? The correct headline would be, “Niacin doesn’t cause serious side effects; drugs do.”

Why the B Vitamins Are So Important

The B vitamins were discovered due to terrible nutritional epidemics: pellagra (niacin/vitamin B3 deficiency) and beriberi (thiamine/vitamin B1 deficiency). We are very sensitive to a deficiency of niacin. Over 100,000 people died in the American south in the first two decades of the 20th century due to a lack of niacin in their diet. It was perhaps the worst nutritional epidemic ever observed in modern times, and was a ghastly testimony to how vulnerable the human animal is to niacin deficiency. The pellagra and beriberi epidemics took off shortly after the introduction of processed foods such as white rice and white flour. Poor diets, mental and physical stresses, and certain disease conditions have all been proven to actively deplete nicotinamide adenine dinucleotide (NAD) levels, causing patients to respond favorably to greater than average niacin dosing.

How is it possible that niacin can be useful for many different conditions? It seems too good to be true. The reason is that niacin is necessary for more biochemical reactions than any other vitamin-derived molecule: over 450 different gene-encoded enzymatic reactions (UniproKB database of the Swiss Institute of Bioinformatics; (Penberthy 2013)). That is more reactions than any other vitamin-derived co-factor! Niacin is involved in just about every major biochemical pathway. Some individuals, who have a genetically encoded amino acid polymorphism within the NAD binding domain of an enzyme protein, will have a lower binding affinity for NAD that can only be treated by administering higher amounts of niacin to make the amount of NAD required for normal health. Genetic differences such as these are why many individuals require higher amounts of niacin in order for their enzymes to function correctly (Ames 2002).

It is a deadly shame that the media so often ignores this information. Fortunately, many physicians will see through the recent headlines that give misinformation about niacin, having already personally witnessed how effective high dose niacin therapy is for preventing cardiovascular disease.

Nutrients are the Solution, Not the Problem

So what is the solution? At the end of the day the data on patients with problem cholesterol/LDL levels still support 3,000-5,000 milligrams of immediate-release niacin as the best clinically-proven approach to maintaining a healthy lipid profile. Niacin in 250mg to 1000mg doses can be purchased inexpensively from many sources. Extended-release niacin is the form of niacin that is most frequently sold by prescription, but it has more side effects than immediate release (plain old) niacin. . . and it costs much more.

Tangential to niacin but pointed to cardiovascular disease, conventional medicine is finally beginning to respect chelation therapy as an approach owing to the recent unparalleled positive clinical results for cardiovascular disease patients with diabetes – up to 50% prevention of recurrent heart attacks and 43% reduction in death rate from all causes (Avila 2014). Some times chelation therapy can be expensive. However, there are other inexpensive approaches include high dose IP6 therapy that are yet to be conventionally appreciated. Other supplements desirable for any ideal cardiovascular disease: a nutritional regimen include additional vitamin C, magnesium, coenzyme Q, fat soluble vitamins (A, D, E, and K2), and grass-fed organic butter. Your ideal intake varies with your individuality.

Nutrients such as niacin you need. Media misinformation you don’t.

Source: This article was published by the Orthomolecular Medicine News Service. You can subscribe to their content.