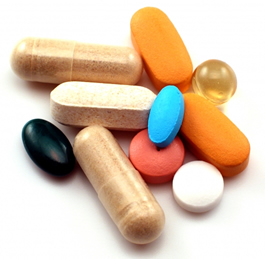 (OMNS March 18, 2014) A middle-aged male had success rapidly reducing fast-acting alprazolam (Xanax) dosage by taking very high doses of niacin, along with gamma aminobutyric acid (GABA) and vitamin C. The individual had been on 1 mg/day Xanax for two years, a moderate dose but a long duration. As a result, he had been presenting increased anxiety, personality changes, and ringing in the ears (tinnitus), all side effects likely due to long-term alprazolam use. Typical withdrawal from this drug would involve substitution medication, about a 10% dose reduction per week, and take a matter of months.[1] A fast withdrawal is a 12.5 to 25% reduction per week.[2] On very high doses of niacin, vitamin C, and also GABA, this individual reported being able to cut the dose 60% down to 0.4 mg in one week. The dose was reduced by 90% (to 0.1 mg/day) in less than a month. He reported residual anxiety, but that it was substantially less than when fully medicated. After a total of five weeks, the medication intake was zero, with minimal residual anxiety.

Niacin doses were between 6,000 and 12,000 mg/day. The individual reported reduced anxiety when taking the highest levels of niacin. Bowel-tolerance levels of vitamin C were taken daily, along with 750 mg of GABA twice daily. The individual also drank a quart of beet/cabbage soup broth daily for the first week, took 400 mg magnesium citrate/day, and took sublingual methylcobalamin (hi-absorption B-12), 5,000 mcg twice a week. During the initial total withdrawal from alprazolam, intake of GABA was 750 mg three times daily. The patient experienced side effects of daily but manageable anxiety. He also reported occasional nausea, possibly attributable to the GABA and almost certainly attributable to the extremely high niacin intake. He experienced increased frequency of urination, especially at night. Evening niacin doses as inositol hexaniacinate (a semi-sustained release, no-flush niacin) reduced nighttime urination. The individual used regular flush niacin about three-quarters of the time; inositol hexaniacinate constituted the balance. Dosage was divided into eight to ten 1,000 mg 8-10 such doses in 24 hours. Niacinamide was specifically not used, as its nausea threshold is low (under 6,000 mg day).

Dr. Abram Hoffer had observed beneficial anticonvulsant activity by performing coadministration of niacinamide with anticonvulsants to treat epileptics in the early 1950s (personal communication). The dosage of the anticonvulsant could be reduced by 50% when 1,000-2,000 mg of niacin was administered with each meal. Hoffer noted that this was beneficial to patients because at the lower dose of anticonvulsant they were not nearly as drowsy.

A common question is, how exactly GABA taken orally can help if it does not readily cross the blood brain barrier (BBB). While GABA receptors are primarily known for their CNS locations and functions, there are also GABA receptors in the liver, immune cells, and lung cells that are accessible to bind GABA without crossing the BBB. The peripheral benzodiazepine receptor TSPO, as mentioned above, is one example. This can activate neurons in peripheral nerves that ultimately affect the CNS as well.

This case report described however, showed a positive result when using niacin. The common theme here is nicotinamide adenine dinucleotide (NAD) since both niacin and niacinamide are converted to NAD by the body. This indicates that therapeutic benefit is most likely being mediated via the increase in NAD levels, not through activation of the high affinity niacin G-protein coupled receptor, GPR109a, which niacinamide does not bind. NAD is used in over 450 reactions by the body, which is more than any other vitamin-derived molecule. The following are just a small list of the pathways that are dependent on it: drug/xenobiotic metabolism, steroid metabolism, basic glycolysis/TCA ATP generation, and many more.

These pathways are quite complicated, but one thing is for certain. We are susceptible to niacin deficiency as exemplified by the deadly pellagra epidemics in the first two decades of the 20 century, which killed over 100,000 people in the southern United States. Due to this epidemic, President Roosevelt commissioned epidemiologists to begin working on this serious problem. Many people with skin disorders were placed in sanitariums because common subclinical pellagra symptoms are dermatitis and sensitivity to sunlight.

Niacin is thought to help maintain homeostasis of neurotransmitters that are commonly unbalanced in the brains of those with anxiety [8], and it may also alter the metabolism of Xanax. As a primary participant in the hydroxylation reaction characteristic of phase 1 drug-metabolizing enzymes, NAD can speed up the metabolism of toxic waste products arising from the metabolism of the foreign alprazolam molecule.[8,9]

Specifically, Xanax is metabolized by the enzyme CYP3A4. Xanax induces CYP3A4 expression, meaning the body responds to Xanax administration by making more of the enzyme that degrades the Xanax molecule. The enzymatic reaction is dependent on the presence of the cofactor NAD, which is derived from niacin in the diet. The drug metabolizing enzyme reaction cannot proceed without the presence of all 3: the substrate (Xanax), the enzyme (CYP3A4), and the cofactor in NAD (derived from niacin). Individuals taking Xanax are likely to have high levels of the drug and the enzyme. But the metabolic reaction utilizing this enzyme that degrades the drug is commonly limited by insufficient levels of the cofactor, NAD.

By administering high doses of niacin, the concentration of NAD is increased, which then accelerates the rate of the drug-metabolizing reaction, ultimately clearing the drug from the body faster. The niacin flush / vasodilation is likely to aid in delivery to otherwise hard to reach anatomical locations as well as increase physical flow of the drug metabolites.

GABA seems likely to be a safer replacement to withdraw from as compared to simple weaning off of alprazolam. Using GABA is an orthomolecular approach, involving manipulating a substance normally present in the body. Ingested GABA will be metabolized by the normal endogenous mechanisms, for which humans have evolved to control properly. GABA will likely be cleared better than alprazolam and not be afflicted with the non-specific affects associated with the foreign molecule that GABA is.

GABA is one of the main inhibitory neurotransmitters in the brain. Oral GABA does not cross the blood brain barrier (BBB), but yet GABA oral ingestion still exerts the calming effect that is attributed to GABA activity. Low GABA is detectable in Xanax withdrawal, while plenty of GABA enables one to feel calm and to sleep better. GABA has been successfully used to assist with Xanax withdrawal .[10]

Another molecule, picamilon, is a niacin molecule bonded to GABA as one single molecule that may be useful. Picamilon crosses the BBB and then is broken down to niacin and GABA. Picamilon can help restore GABA receptor levels.

Also GABA is degraded into succinate, which in its own right can provide a significant source of energy as it directly enters the TCA cycle. Even though the exact reason is unknown, people taking GABA have noticed calming effects. The placebo effect may be responsible for part of the benefit. However, it is likely at high doses some GABA does get into the CNS.

Because ascorbate in high doses is a strong antitoxin [11], it is considered to be an important inclusion. Flu-like symptoms common in benzodiazepine withdrawal may be ameliorated with vitamin C. Ascorbate also provides support for the liver, ranging from 500 mg/day preventing fatty buildup and cirrhosis to 5,000 mg of vitamin C per day appearing to actually flush fats from the liver, to 50,000 mg/day eliminating jaundice in under a week. [12]

Magnesium depletion is common in nearly all examples of people ingesting drugs. Thus, magnesium supplements are helpful. Nightly Epsom salt baths and 400 mg of magnesium citrate, once in the morning and once in the afternoon can facilitate a smooth transition away from alprazolam. Also realize that if you desire to measure your magnesium levels, be sure to do either the red blood cell test or the ionized magnesium test. However, do not test for serum magnesium levels. Serum magnesium concentrations are so tightly controlled that the results are invariably normal, so the test has been removed from the standard blood test suite.

Collectively this case history and biochemical rationale indicate that very high doses of niacin, GABA, and vitamin C together may greatly speed detox and reduce withdrawal symptoms from alprazolam. Additional therapeutic trials are warranted. It is emphasized that every person is different and that this experience may not be applicable to all. Alprazolam is a seriously addictive drug and withdrawal symptoms may be severe. Every individual should work closely with their healthcare provider.

(Dr. Todd Penberthy is a research consultant, medical writer and niacin researcher. A list of his recent papers is posted at http://www.cmescribe.com/resume/ Andrew W. Saul, OMNS Editor, is the general editor of the comprehensive textbook, The Orthomolecular Treatment of Chronic Disease, to be published in late June, 2014. http://www.doctoryourself.com/treatmentreviews.html )

3. Lapin IP. (1981) Nicotinamide, inosine and hypoxanthine, putative endogenous ligands of the benzodiazepine receptor, opposite to diazepam are much more effective against kynurenine-induced seizures than against pentylenetetrazol-induced seizures. Pharmacology Biochemistry and Behavior, 14(5): 589-593.

9. Prousky J and Seely D. (2005) The treatment of migraines and tension-type headaches with intravenous and oral niacin (nicotinic acid): systematic review of the literature. Nutr J, 4:3.

12. Cathcart, Robert F. III. (1981) The method of determining proper doses of vitamin C for the treatment of disease by titrating to bowel tolerance. Journal of Orthomolecular Psychiatry. 10:125-132.

Source: This article was published by the Orthomolecular Medicine News Service. You can subscribe to their content.