If My Thyroid Is Normal, Why Do I Feel So Bad?

Type “hypothyroidism symptoms” in a Google search. You will get the following list from the website of the prestigious Mayo Clinic, which is high on the list of hits:

Eureka! If you have been frustrated in your search for why you feel so bad, you suddenly think you’ve found a diagnostic pot of gold! This certainly appears to be the answer you’ve been searching for: the proverbial “underlying cause” for your chronic ill health. It may not be an exact fit, but so many of these symptoms are just what you’ve been suffering from for so long now.

Excitedly you print out the article and bring it to your doctor. He’s interested! He too would like to help you figure out WHY you’ve been afflicted with so many disjointed symptoms. (You’ve already tried the antidepressant med he prescribed, and the pain med, as well as the muscle relaxer, and maybe even a sleeping pill or fibromyalgia med. None of these helped much. The side effects became intolerable.)

He says, “Okay, let’s do thyroid testing to check this out.” You practically run to the lab with high hopes of nailing what should be a slam dunk diagnosis. You know it’s going to be abnormal because you have a parent and several other family members who have had thyroid problems. Soon the letter (or e-mail or phone call) comes: “You’re thyroid is okay. The test was in the normal range.”

What?!! Was there some kind of mistake? Did they get my blood mixed up with someone else’s? It can’t be…I fit the symptom profile so precisely.

Now your doctor is a bit upset. A lab test is an objective result…and it was NORMAL. He’s giving you that “Are you a closet hypochondriac?” look. But you know your symptoms are real. Why doesn’t the lab test match up?!!

This extremely frustrating situation (for both the patient AND the doctor) happens over and over in conventional medical settings. WHY?

After working at the Riordan Clinic for 25 years and hearing of this scenario several times a week, I believe I now know why this happens. More importantly, I know HOW it can be remedied.

First of all, it is a matter of training. The vast majority of docs are trained to evaluate thyroid-like symptoms with a single test: the TSH. TSH stands for Thyroid Stimulating Hormone.

The training here in unequivocal: “If the thyroid gland is functioning normally, the TSH test will be in the normal range.”

Turns out, this is indeed true. Your thyroid GLAND is usually normal when your TSH is normal. (There is an exception I’ll discuss a little later.) However, a normal TSH does not mean your overall thyroid-metabolic system is normal. There is more to the story.

The symptoms of hypothyroidism typically occur when the overall thyroid-metabolic SYSTEM has become dys-regulated. This can occur even when the thyroid gland is functioning “normally.” This is generally NOT TAUGHT to conventional medical doctors. The science is there, but it has not been disseminated to the medical profession—yet.

To understand thyroid-metabolic system DYS-REGULATION, you have to think back in time to when our ancestors lived and fought to survive without the benefit of doctors, hospitals, and grocery stores.

Say the hunting was terrible, or no food was available to gather. That’s called “starvation.” In that situation, keeping the metabolic rate high with rapid burning of bodily fuel reserves was a huge survival disadvantage. How could the body “shift gears” and quickly slow the metabolism in order to conserve energy?

Every system in the human body is based upon homeostasis. This means “balance.” But this balance is not rigid, it must be adaptive.

If our thyroid-metabolic system was not homeostatic, it could not adapt to changing environmental conditions. Our ancestors would not have been able to survive starvation, injuries, poisoning, and a whole host of disruptive and inflammatory situations they typically encountered.

Fortunately, there is a simple molecular explanation for how the thyroid system maintained this crucial adaptive balance. This explanation is also the KEY to understanding why the TSH test is insufficient to accurately diagnose hypothyroidism. Pay attention!

What molecule does the thyroid gland make? Thyroxine, or levothyroxine, or T4. The image to the left shows us what the molecule looks like.

See the four iodines? That’s why it is called T4. A normal thyroid gland makes T4. A normal TSH means your thyroid is making a normal amount of T4. Unfortunately, environmental issues like starvation or infection can affect what happens to that T4.

So what happens to T4 after it is made? It is converted to T3 by an enzyme called de-iodinase. This enzyme, as its name implies, removes one of the lower iodines to create the T3 molecule, which is called Liothyronine: (image follows on the next page) 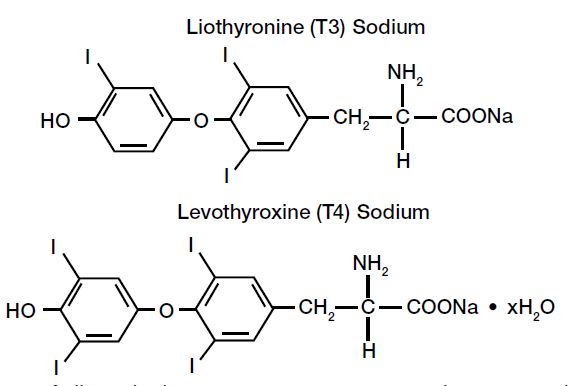 When this conversion occurs, the T3 formed is approximately FOUR TIMES the potency of T4. This means that the thyroid hormone has been activated to better turn on the metabolic system to generate more energy and to better activate every cell and every organ in your body.

But if all you had was an activation system with no counterbalance, how would the body maintain homeostatic balance? (Get ready. What follows is the part that most doctors have never been taught.)

There are actually TWO DE-IODINASE enzymes! The one mentioned above that creates T3 is called the 5’ (Five Prime) de-iodinase. Then there’s the sister enzyme called just 5 de-iodinase and it takes off THE OTHER lower iodine in order to create Reverse T3, also symbolized as rT3 (the bottom molecule in the three that follow.) 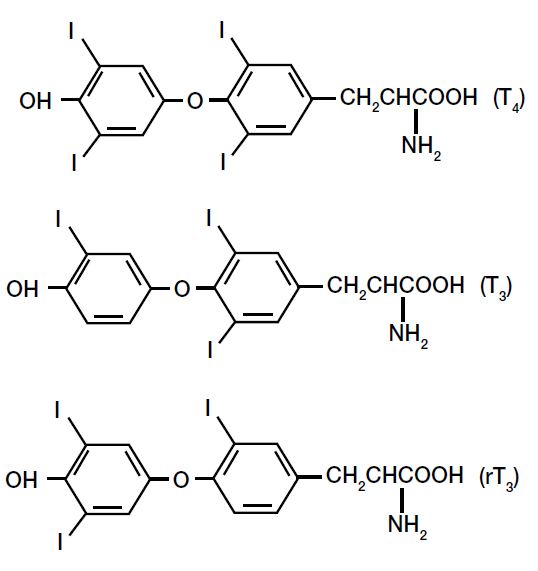 rT3 is the mirror image of T3. T3 is about FOUR TIMES AS POTENT as T4, whereas rT3 has ZERO POTENCY. It is the proverbial “blank key.” It fits into the T3 receptors present on the nucleus of every cell in the body. It fits, but it blocks T3 molecules. It is what endocrinologists call a “competitive inhibitor” of thyroid function at the cellular level.

Are you starting to get the picture? T3 activates and rT3 inhibits. This is thyroid homeostasis at the cellular level. Ask your doc if he’s aware of this.

Here’s the piece of the puzzle that solves the big enigma of WHY MY THYROID IS “NORMAL” WHEN I FEEL SO BAD:

Environmental threats (stress, starvation, infection, inflammation, and / or poisons) are met with a simple adaptive response: the body DOWN-REGULATES 5’ DE-IODINASE.

This enzymatic down-regulation (which can happen fairly quickly) reduces the conversion of T4 to T3. Plus, the thyroid gland is still pumping out T4 which has to “go somewhere.” It has to go down the other enzymatic pathway: more T4 gets converted to rT3.

This then tips the homeostatic balance of the T3/rT3 ratio in favor of rT3. The resulting metabolic slowdown SAVES ENERGY short term. This is called an “epigenetic response” that has short term survival value that gives us time to figure out an adaptive response to the threat. 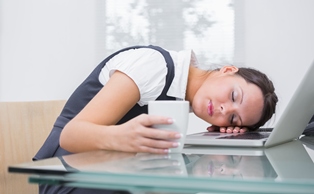 Unfortunately, IF the environmental threat does not resolve, the metabolic slowdown can go long term. This results in a FUNCTIONAL STATE OF HYPOTHYROIDISM—even if the TSH test is normal!!

If you have the symptoms listed at the beginning of this article, and your TSH is normal, ask your doctor to draw a Reverse T3 and a Free T3 level. If the rT3 is running high or high normal, and the fT3 is running low or low normal…you have functional hypothyroidism at the cellular level.

So what’s the cure? Correct the underlying dys-regulators, of course! This is easier said than done. In the meantime, there are safe ways to re-balance your fT3/rT3 ratio using low dose hormonal prescriptions. Call us if you are interested in finding out more about this.

Hopefully you now realize you are not a hypochondriac. And your doctor is not a bad doctor—he’s probably not been exposed to this new info. Have him go to www.nahypothyroidism.org, which has comprehensive explanations and hundreds of scientific references.

You might also want to watch my video on this issue, The Thyroid Link to the Potbelly Syndrome, at Riordanclinic.org/education/lectures which goes into this model in greater depth and applies it to a common outcome (the potbelly) of having a dys-regulated fT3/rT3 ratio.

There is one other related scenario we can’t cover here (the exception I mentioned earlier): autoimmune thyroiditis.

Coping With the Aftermath of Viral Infection

Posted on February 14, 2021 Understanding “Long-Haul” Covid As if the initial infection wasn’t enough to have the world worried about COVID-19, there is now ...
VIEW BLOG ARTICLE