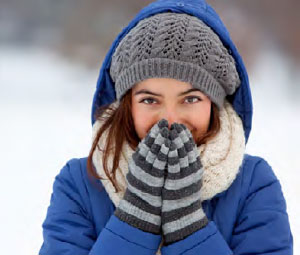 The weather changes in autumn, cold temperatures set in, and runny noses and sniffles start to seem like an epidemic. Around Halloween, the combination of the cold and sugar from our successful trick-or-treating venture sets most of us up for a spate of colds and the flu that come and go through the winter. Is there a simple way to boost your immune system so you will not get sick?

We all possess the innate ability to protect ourselves from disease. This wondrous disease-prevention system is the immune system. The function of the human immune system is to defend the body against invaders. Microbes (germs or microorganisms), cancer cells, and transplanted tissues or organs are all interpreted by a healthy immune system as “non-self” against which the body must be defended. Although the immune system is extremely complex, its basic strategy is simple: to recognize the enemy, mobilize forces, and attack.

A strong immunity is the first line of defense against colds, the flu, and countless other viral and bacterial germs. Since prevention is better than a cure, it pays to work on giving the immune system all the help it can get.

The overuse of pharmaceutical drugs, and the lack of information concerning immunity boosting has left the average American’s immune system efficiency level at 40% or 50%, at best. Some countries, like Japan, have a traditional diet that creates a stronger immune system and consequently Japanese people (who embrace the traditional diet) usually live a longer lifespan. It’s no coincidence that Japanese women are among the longest living people on the planet.

Here we will discuss ways to boost your immune system. As our clinic specializes in alternative therapies, we offer information on supplements and living a healthy lifestyle. Adequately feeding your immune system boosts its fighting power. Immune boosters work in many ways. They increase the number of white cells in the immune system army, train them to fight better, and help them form an overall better battle plan. Boosters also help to eliminate the deadwood in the army, substances that drag the body down.

There are countless supplements that claim to be involved in supporting or boosting a healthy immune system.

According to estimates, 40% of U.S. adults use supplements regularly and spend $1.3 to $1.7 billion on them annually. About half of these persons take a combination vitamin and mineral product.

Most of the research on vitamin and mineral supplementation has been related to its effects on immunity and infectious disease. Various degrees of malnutrition, even of individual micronutrients, are known to markedly impair immune function. The extent to which subtle deficiencies of various micronutrients contribute to clinically significant infections is unclear. Several studies indicate that vitamin supplementation may improve various immunologic factors. However, other trials demonstrated an impaired immunologic response in participants who consumed larger-than-recommended quantities of certain nutrient supplements.

There are several natural ways to maintain or boost the immune system:

In addition to these tips for boosting the immune system, there are also certain herbs and nutrients that have an influence on the immune system. It is important to emphasize that the research in this area is quite incomplete, and we need to learn more before making any definitive recommendations. As a general rule, it is best to use these immune-system-boosting herbs or supplements for a limited time or with breaks, as opposed to uninterrupted daily use for months and years. Too high a dosage or taking these herbs for too long without a break may actually reduce immunity or have positive or negative effects that we are not yet familiar with. A lot of information about supplements can be found on our website and in lectures of our doctors.

Hundreds of supplements are claimed to give the immune system additional support during the winter. However, we will provide you with information on a few supplements that we have found to be especially effective for general immunity boosting, as well as treatment of specific ailments. 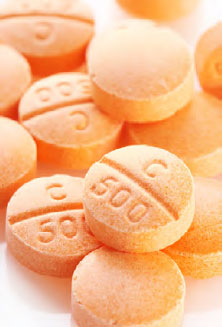 Vitamin C tops the list of immune boosters for many reasons. There has been more research about the immune-boosting effects of vitamin C than perhaps any other nutrient. Vitamin C supplements are inexpensive to produce, and it is available naturally in many fruits and vegetables. Vitamin C increases the production of infection-fighting white blood cells and antibodies and increases levels of interferon, the antibody that coats cell surfaces, preventing the entry of viruses.

Vitamin C has intrinsic antiviral and antibacterial activity and is beneficial in general immunity boosting, helping to ward off or prevent colds and flus, assisting the healing of wounds, aiding the body in fighting infection.

Unlike most animals that produce their own vitamin C, the human body does not synthesize any. Whether for general immunity boosting or for the treatment of a specific condition, one requires more vitamin C than our contemporary diet supplies. The RDA (Recommended Daily Allowance) is easily obtained from fresh fruits and vegetables. Higher dosages such as 500 milligrams to 5 grams per day have been proven to be beneficial in the prevention of colds and general immunity boosting. However, vitamin C dosage of over 1 gram can realistically only be obtained through supplements.

If you are experiencing cold symptoms, we suggest a dosage of 4 to 5 grams taken during the day. If this treatment is started in the early stages of a cold, it will often fail to develop. If the cold has already developed, this treatment will usually lessen the effect of the cold and speed recovery.

Vitamin E
This important antioxidant and immune booster does not get as much press as vitamin C, yet it is important to a healthy immune system.

Vitamin E stimulates the production of natural killer cells that seek out and destroy germs and cancer cells. Vitamin E enhances the production of B-cells, the immune cells that produce the antibodies that destroy bacteria. Vitamin E supplementation may also reverse some of the decline in immune response commonly seen in aging and has been implicated in lowering the risk of cardiovascular disease. In the Harvard School of Public Health study of 87,000 nurses, vitamin E supplementation was shown to cut the risk of heart attacks by fifty percent.

It is not difficult to get 30 to 60 milligrams every day of vitamin E from a diet rich in seeds, vegetable oils, and grains, but it is difficult for most people to consume more than 60 milligrams a day consistently through diet alone. Supplements may be necessary to get enough vitamin E to boost your immune system.

You need 100 to 400 milligrams per day, depending on your general lifestyle. People who do not exercise, who smoke, and who consume large amounts of alcoholic beverages will need a higher dosage. 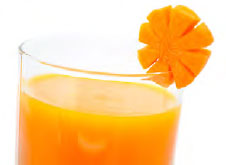 Beta carotene increases the number of infection-fighting cells, natural killer cells, and helper T-cells, as well as being a powerful antioxidant that mops up excess free radicals that accelerate aging. Like the other “big three” antioxidants, vitamins C and E, it reduces the risk of cardiovascular disease by interfering with how the fats and cholesterol in the bloodstream oxidize to form arterial plaques. Beta carotene also protects against cancer by stimulating the immune cells called macrophages to produce tumor necrosis factor, which kills cancer cells. Beta carotene supplements also have been shown to increase the production of T-cell lymphocytes and natural killer cells and enhance the ability of the natural killer cells to attack cancer cells.

The body converts beta carotene to vitamin A, which itself has anticancer properties and immune-boosting functions. But too much vitamin A can be toxic to the body, so it is better to get extra beta carotene from foods and let the body naturally regulate how much of this precursor is converted to the immune-fighting vitamin A.

BIOFLAVENOIDS
A group of phytonutrients called bioflavenoids aid the immune system by protecting the cells of the body against environmental pollutants. Bioflavenoids protect the cell membranes against the pollutants trying to attach to them. A diet that contains a wide variety of fruits and vegetables, at least six servings per day, will help you get the bioflavenoids needed to help your immune system function properly.

This mineral increases the production of white blood cells that fight infection. Zinc increases the number of infection-fighting T-cells, especially in elderly people who are often deficient in zinc, and whose immune system often weakens with age. The antiinfection effect of zinc is controversial. While some studies claim that zinc supplements can lower the incidence and severity of infections, other studies have failed to show this correlation. 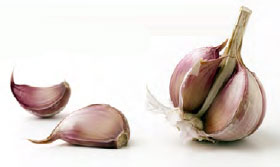 This flavorful member of the onion family is a powerful immune booster that stimulates the multiplication of infection-fighting white cells, boosts natural killer cell activity, and increases the efficiency of antibody production. The immune-boosting properties of garlic seem to be due to its sulfurcontaining compounds, such as allicin and sulfides. Garlic can also act as an antioxidant that reduces the build-up of free radicals in the bloodstream.

A study found that children taking a half teaspoon of flax oil a day experienced fewer and less severe respiratory infections and fewer days of being absent from school. The omega-3 fatty acids in flax oil and fatty fish (such as salmon, tuna, and mackerel) act as immune boosters by increasing the activity of phagocytes, the white blood cells that eat up bacteria. (Perhaps this is why grandmothers used to insist on a daily dose of unpalatable cod liver oil.) Essential fatty acids also protect the body against damage from over-reactions to infection. When taking essential fatty acid supplements, such as flax or fish oils, take additional vitamin E, which acts together with essential fatty acids to boost the immune system. One way to get more omega-3 fatty acids in your diet is to add one to three teaspoons of flax oil to a fruit and yogurt smoothie.

HERBAL IMMUNE BOOSTERS
Herb and plant oils are some of the oldest medicines. Plant essences derived from herbs, seeds, and leaves were the first medicines of our ancestors. Oregano, lemon, cinnamon, frankincense, peppermint and eucalyptus oils are well known and effective against cold and flu.

One study found no difference in incidence of infection, but their trial was methodologically flawed and persons with possible micronutrient deficiency were excluded.

The second trial, which was performed in a sample of middle-aged persons, demonstrated a benefit in incidence of infection. However, this benefit was almost entirely observed in participants with diabetes, for whom the magnitude was dramatic. Correction of micronutrient deficiencies would be the most biologically plausible explanation for these results. The results of the study suggests that in certain diabetic samples, perhaps those with a high prevalence of micronutrient deficiency, daily use of a multivitamin and mineral supplement can decrease infection frequency.

Another 12-month study of 96 healthy elderly persons showed a statistically significant difference in the mean number of days with an infection-related illness (23 days vs. 48 days) in favor of the group that received the vitamin and mineral supplement. No reported results showed an effect on severity of illness (other than the number of days antibiotics were taken). In addition, participants in the treatment group had statistically significant improvements in several reliable indices of immune function. It should be reiterated that the infections prevented in this study were minor, primarily respiratory tract infections and influenza like illnesses. Nonetheless, because such infections are very common, they account for a large share of the productive days lost in industrialized societies.

By giving your body an adequate amount of the nutrients it needs to function properly, your immune system will be better equipped to fight off illness, whether it is a cold, the flu, or something more severe. Because each individual is different, please consult a physician before beginning any supplement regimen. Call 316-682-3100 and schedule an appointment with a Riordan Clinic doctor today.

Posted on August 9, 2017 FOR IMMEDIATE RELEASE Riordan Clinic Research Institute Publishes Study, “Changes in the rate of PSA progression and the level of ...
VIEW BLOG ARTICLE